I have been AWOL from the last few Tablescape Thursdays at Susan's Between Naps on the Porch, but I'm back this week with a table celebrating Texas bluebonnets.  I saw my first bluebonnets of the season earlier this week and look forward to driving past fields of them in the next week or two.

When I saw bluebonnet dishes at HEB, I knew I had to set a bluebonnet table.  The plates and tumblers are acrylic, so were only $2 each. They'll be perfect on the patio this summer, too. 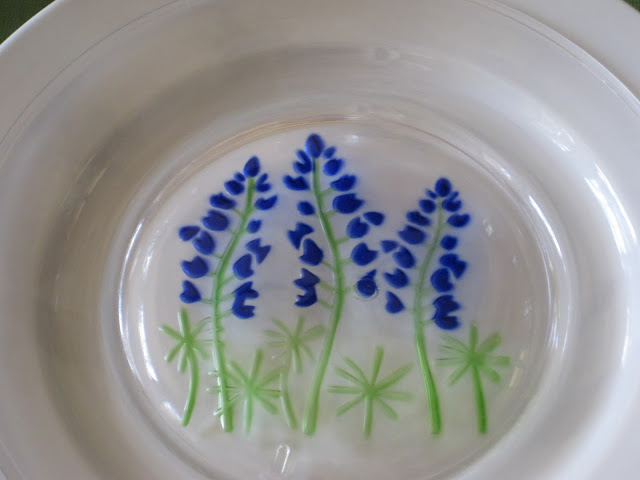 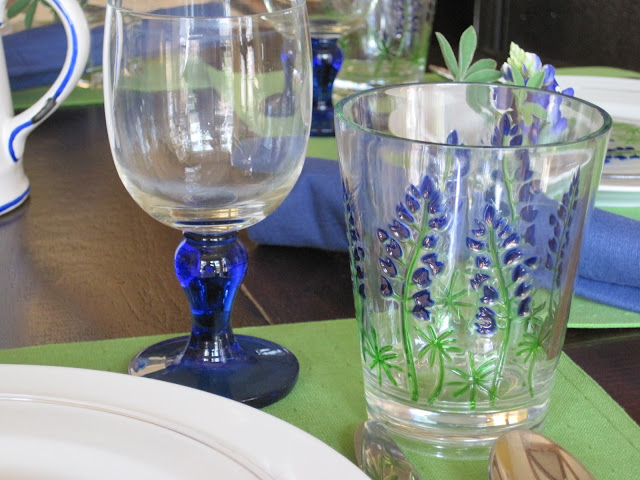 On my way home from HEB, I drove past a field with bluebonnets growing near the road, so I stopped and picked just a few.  Just in case some of you have heard it's illegal to pick Texas' state flower, I double-checked, and it is not!

I hurried home to put them in water before they wilted, using a chipped enamel pitcher as a vase. 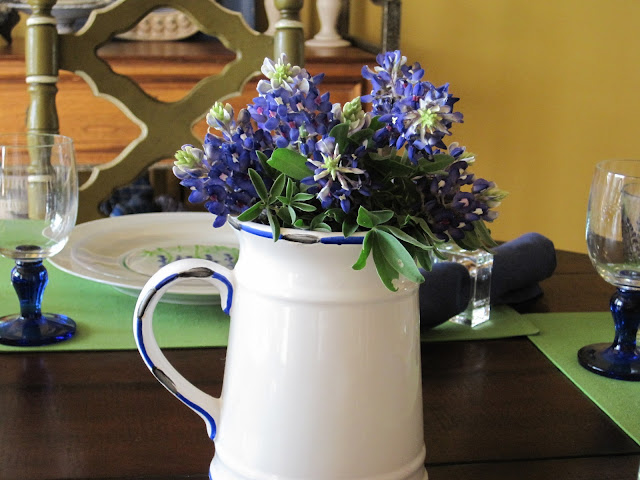 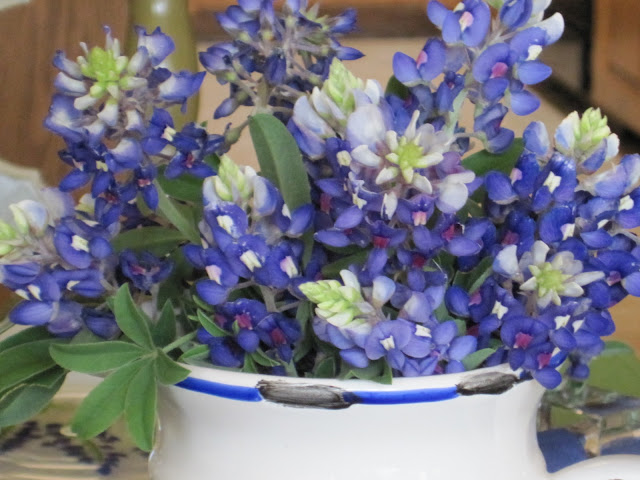 I also put bluebonnets in the wonderful napkin rings my daughter gave me for Christmas. Aren't those napkins the perfect shade of blue?

The napkins are new, from the Bloomingdale Home store in Las Vegas last week.  I checked their Clearance area and found these linen-cotton napkins marked down to 99 cents!  Sold! 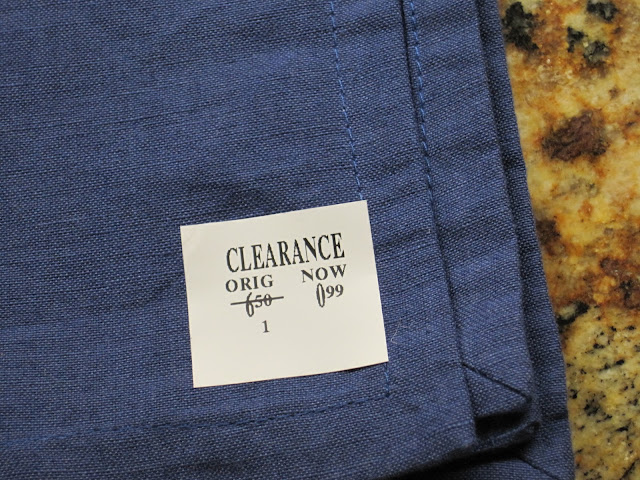 Here's the placesetting.  I first tried blue placemats, but I decided the green was a better backdrop for the bluebonnets.  The bluebonnet salad plate is layered with a plain white dinner plate, and I've added a wineglass with the bluebonnet tumbler.  Silver seemed a bit much with acrylic dishes, so I went with our everyday stainless, Towle Beaded Antique. 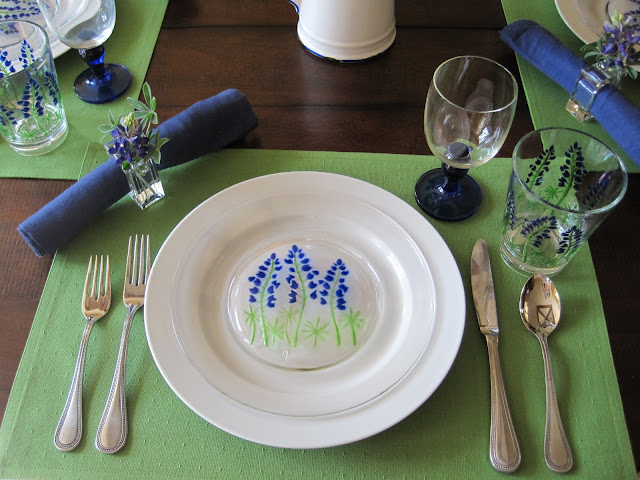 Here's the whole table, set in the breakfast area.  Notice anything different? 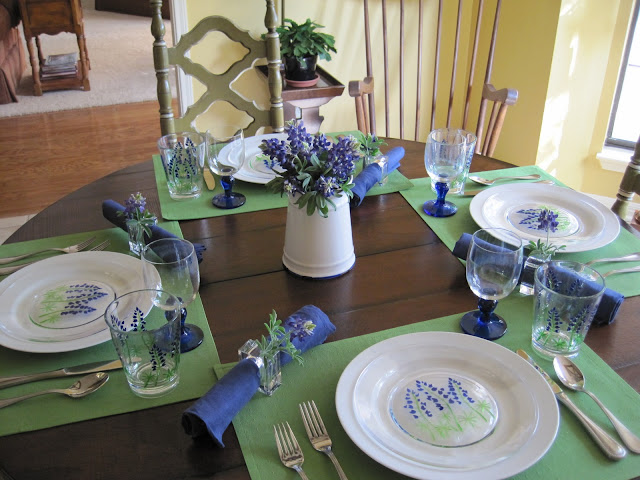 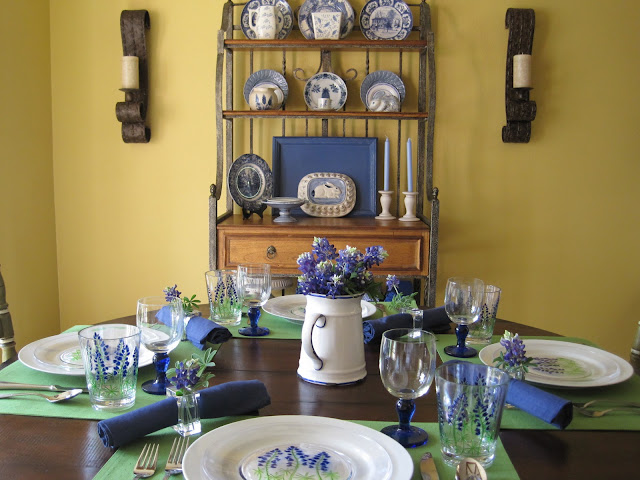 Since the last time I posted a tablescape, we have removed the wallpaper and painted this area.  I still liked the wallpaper (which was here when we bought the house), but it just didn't go with the granite we installed recently.

Here are a few more photos.  Bluebonnet season is all-too-brief, but it's delightful time to for a trip through the hill country! 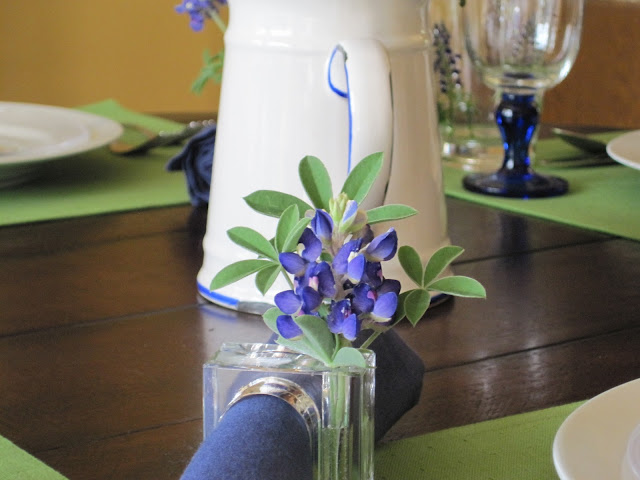 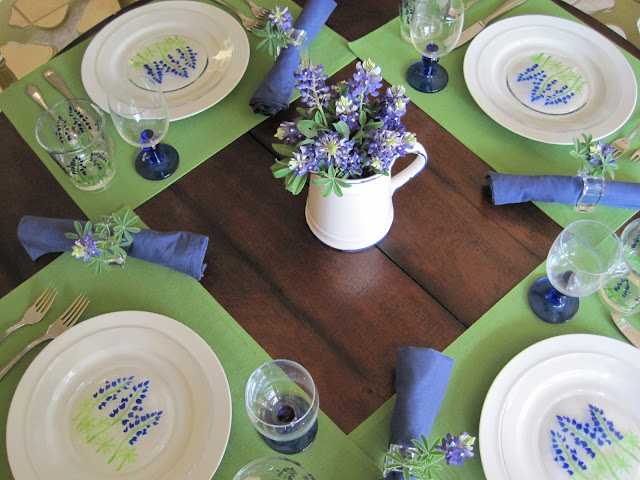 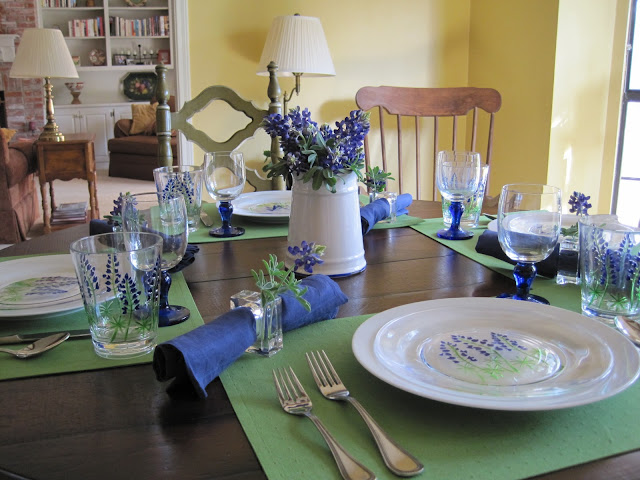 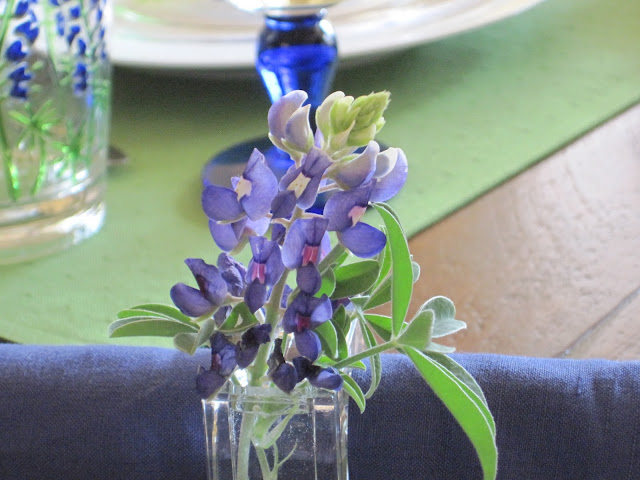 Thank you for visiting my table this week!  I hope you will leave a comment before you leave to visit all the wonderful tablescapes at Susan's Between Naps on the Porch!

As a transplanted Texan, I must admit that I could not have told you the date of Texas Independence Day.  But this year, March 2nd marks the 175th anniversary of the day that Texas declared its independence from Mexico in 1836.  After increasingly strained relations with the Mexican government and with the Alamo in San Antonio under siege, the authors of Texas' Declaration of Independence wrote the document overnight, proclaiming the Texas to be a "free, sovereign, and independent republic."  The Republic of Texas lasted until 1845, when Texas joined the Union as the 28th state.

When we moved to Texas in 2000, it still felt a bit like we'd moved to another country.  Texans are very proud of being Texans!  It took us a while to learn the words to "Texas, Our Texas," which is sung immediately after the national anthem at football games.  Everyone else in the stands seemed to know the words and sang enthusiastically.  Anyway, celebrating a 175th anniversary suggested a tablescape!

Last year, the Texas grocery store chain HEB sold these melamine plates and star-shaped bowls, and when they were finally marked down to fifty cents each, I bought some! 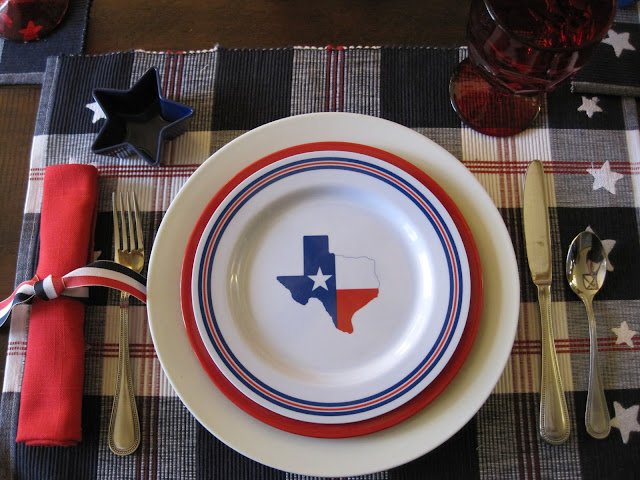 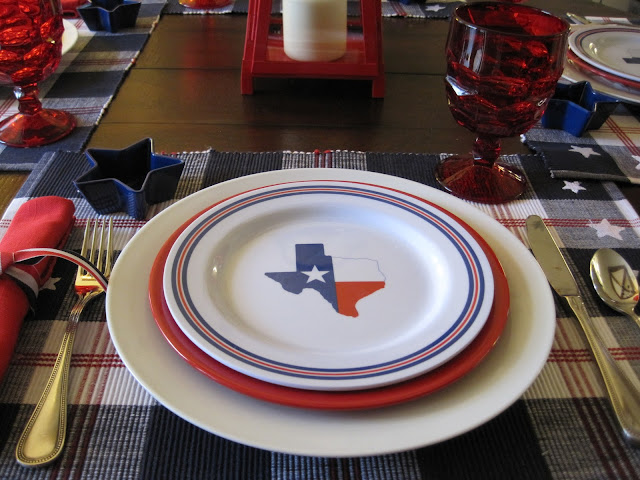 Here's a closer look at the cute melamine pieces.  We'll use the star-shaped bowls for extra barbecue sauce! 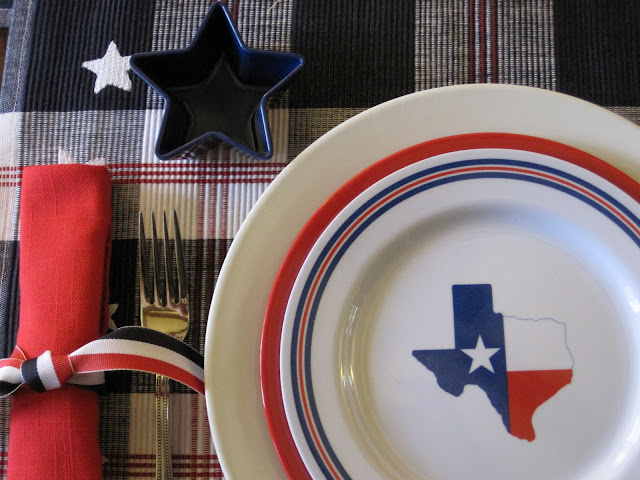 I didn't have any red flowers on hand, nor is it time for the bluebonnets to bloom just yet, so I made do with a red lantern as a simple centerpiece. 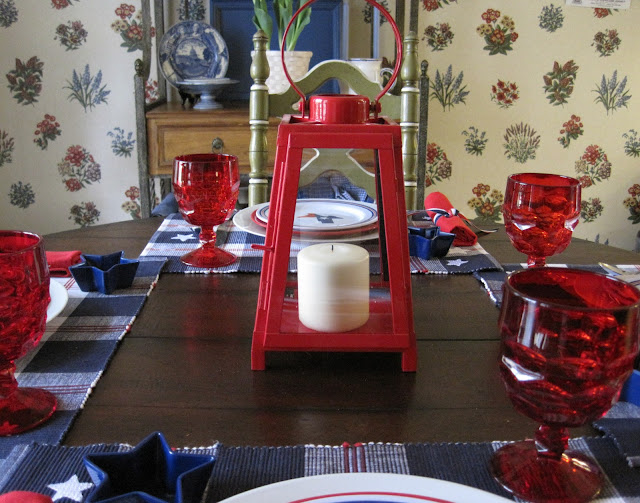 Here's a view of the table, set in the breakfast area. 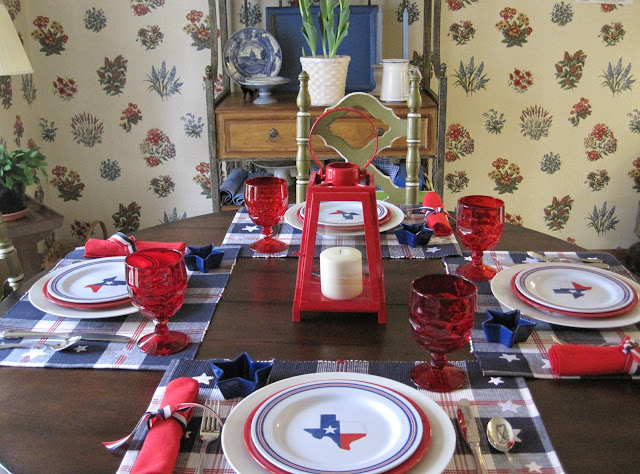 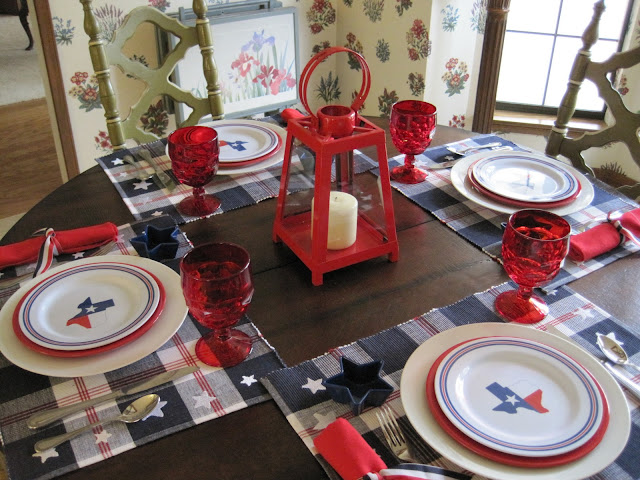 We have enjoyed living in Texas, and have found the natives very friendly.  For example, shortly after we moved here and before we'd gotten our Texas license plates, the woman who took my groceries out to the car (I told you HEB was great!) spotted our out-of-state plates and said, "I see you're new in town.  Have you found a church home yet?"  She then invited me to hers!

Here's to the great state of Texas!

Thank you for visiting my table this week!  I will be linking it to Tablescape Thursday at Between Naps on the Porch, so be sure to check out other tablescapes there tomorrow!