When we moved to Baton Rouge in the early 1990s, we were astonished by the culture in south Louisiana.  It was as if we'd moved to a different country, not just another southern state.  One of the most surprising revelations was that Mardi Gras was a SEASON, not just one day.  Starting right after Christmas (on Epiphany), there were parties and parades and king cakes.  Lots of king cakes!  The tradition in my department at LSU was that whoever found the baby in the king cake had to bring the next king cake -- the next day.  So king cake was available almost every day, right up until the last work day before the long Mardi Gras break.  (LSU had Monday through noon Ash Wednesday off.  Miss that!)

After eight years there, we moved to Texas, and our area doesn't really celebrate Mardi Gras.  But I have wanted to set a Mardi Gras table and finally did so this year.  I was stymied in the past by a lack of purple in my tablescaping supplies, but a recent trip to Sur la Table in Austin remedied that.  Just inside the front door, in a Final Clearance basket, was a set of purple napkins marked at 50% off the lowest marked price.  I was able to shop the house for everything else.

Now, this table is quite tame by Mardi Gras standards.  But by The Dull and the Dutiful standards, it is highly festive! 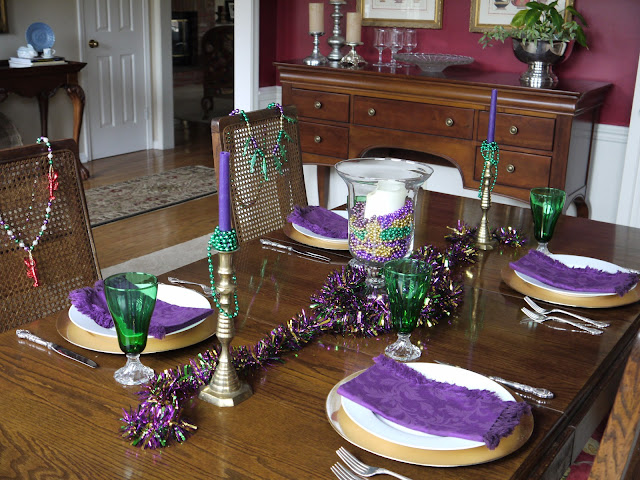 The centerpiece -- a hurricane filled with Mardi Gras beads in the traditional colors of green, gold, and purple, and some sparkly frou-frou garland.  Note the fancier necklaces draped over the chair backs. 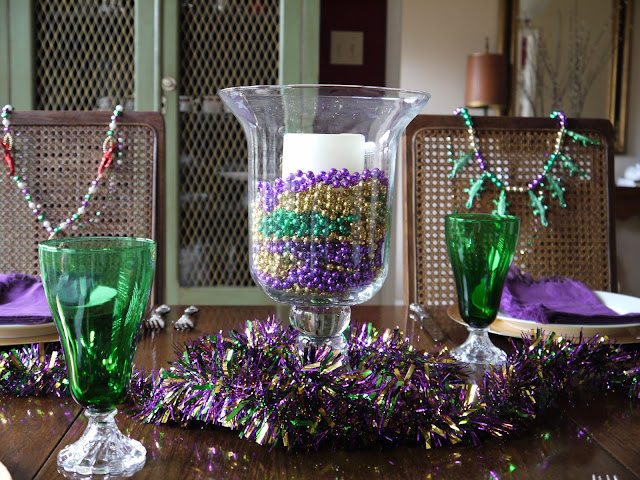 The purple napkins!  I think the fringe complements the garland.  The simple placesetting consists of a gold charger, white plate, and our silver flatware. 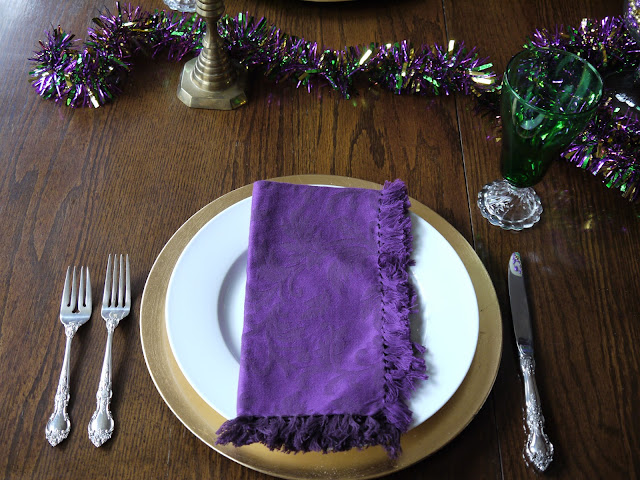 An across-the-table view of the necklace featuring crawfish. 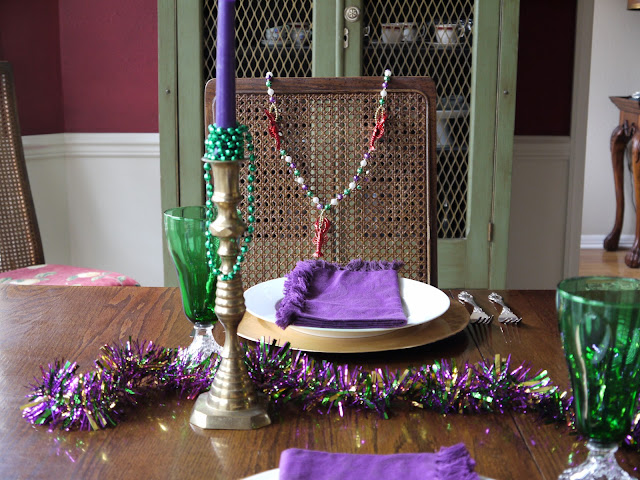 I had purple candles on hand left over from the Advent wreath, so I jazzed them up with some Mardi Gras beads. 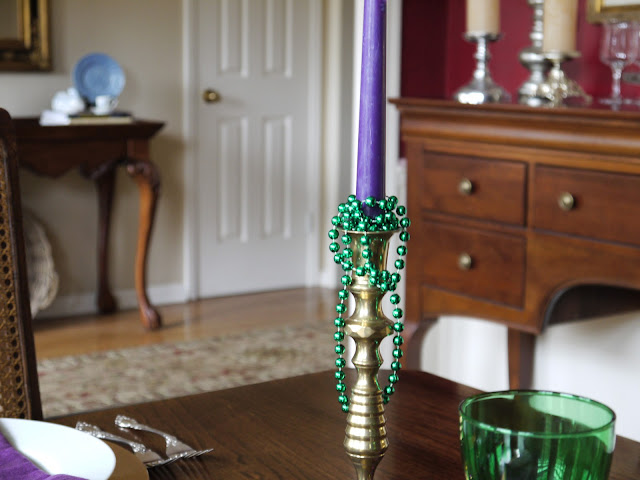 My vintage Anchor Hocking "Burple" glasses have proven to be wonderfully versatile and provided the perfect green. 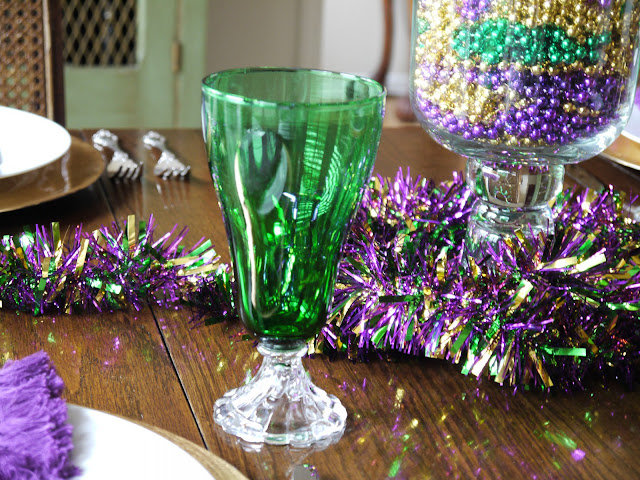 This necklace features alligators, if you can't tell. 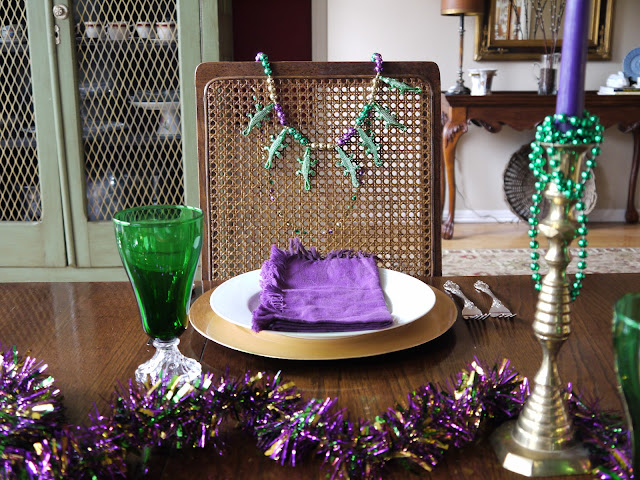 Another view of the table: 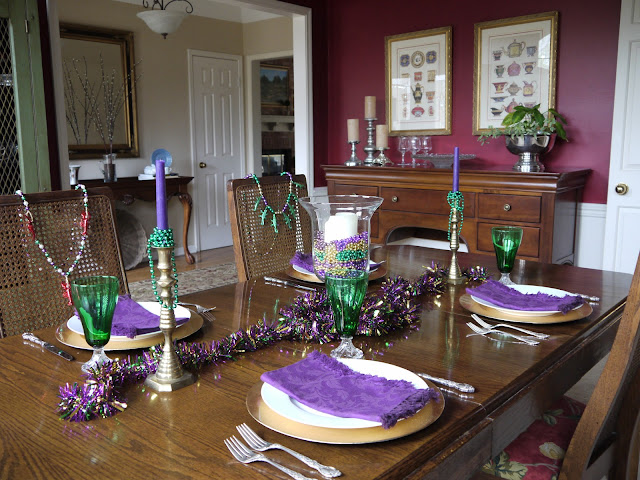 On the menu?  Sensation salad, jambalaya, French bread, and king cake, of course!  Y'all stop by and we'll laissez les bon temps rouler!

I'll be linking to Let's Dish at Cuisine Kathleen and Tablescape Thursday at Between Naps on the Porch.
Posted by Tricia 24 comments

This week's theme for Cuisine Kathleen's Let's Dish party is "Snow - Ice - Winter," and I wanted to play along.  However, snow and ice are rarities here in central Texas, and the day I set this table the temperature hit 73 degrees!  Nevertheless, winter brought to mind bare branches, absence of color, and shiny, reflective surfaces, so I tried to include those elements.

I began with an ecru tablecloth, layered with twig placemats. 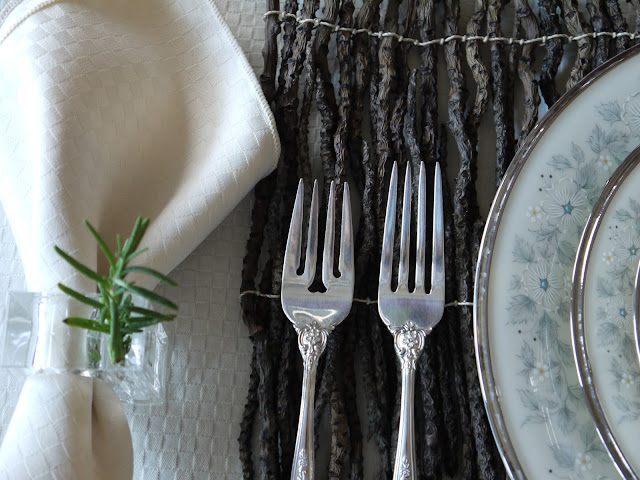 I chose to use my Lenox Windsong, with its pale pattern and platinum trim, along with my Lenox Moonspun crystal and silver goblets, all of which were wedding gifts (now 40 years ago -- I'm vintage!). 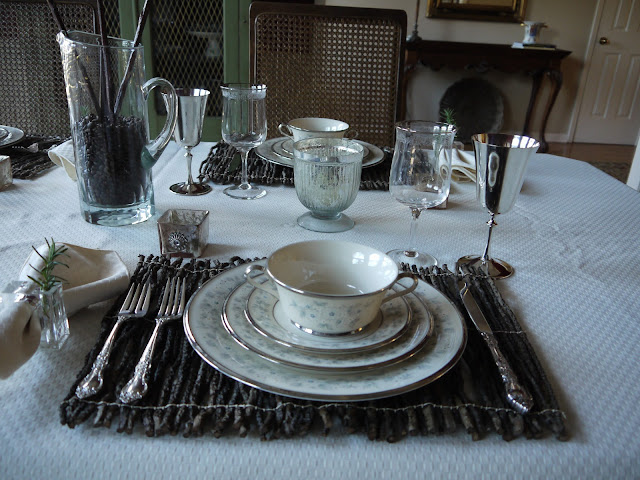 I'm using the cream soups in the placesetting, as winter menus at our house often feature soup. 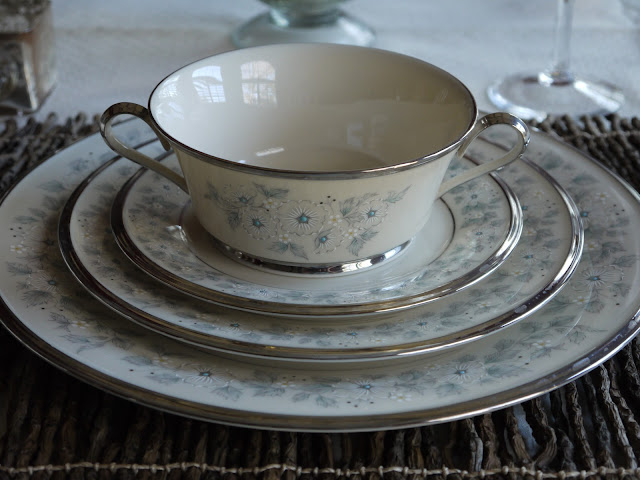 Mercury glass, crystal, and silver add shine and reflection to the table. 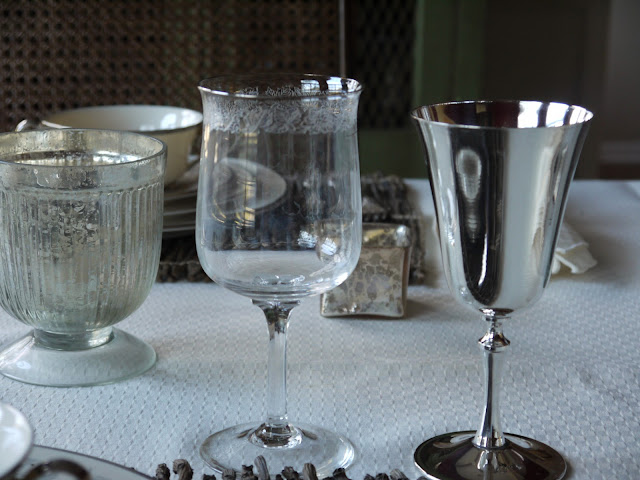 I added my favorite napkin ring bud vases with a sprig of rosemary from the garden for a bit of nature. 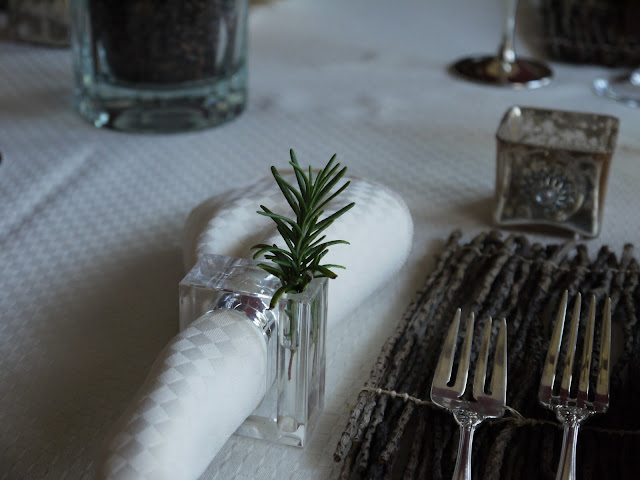 For the centerpiece, some (faux) pussy willow branches "planted" in coffee beans, add a bit more nature to the table. 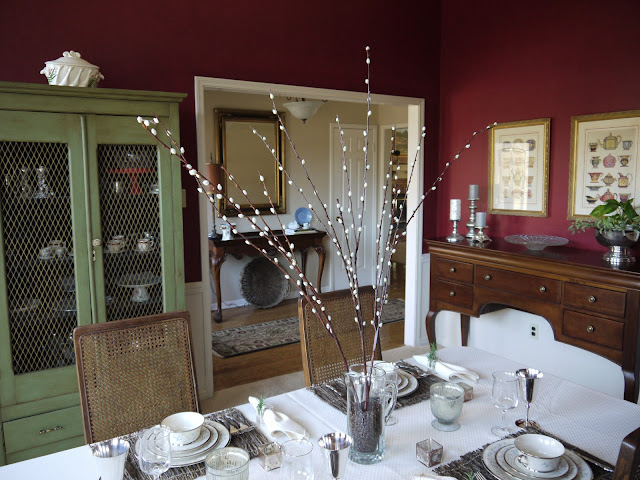 Since the days are short in winter, the table needed plenty of candlelight.  I used mercury glass vases for larger votive candles and little "jeweled" tea light holders, a gift from one of my sisters, for each placesetting. 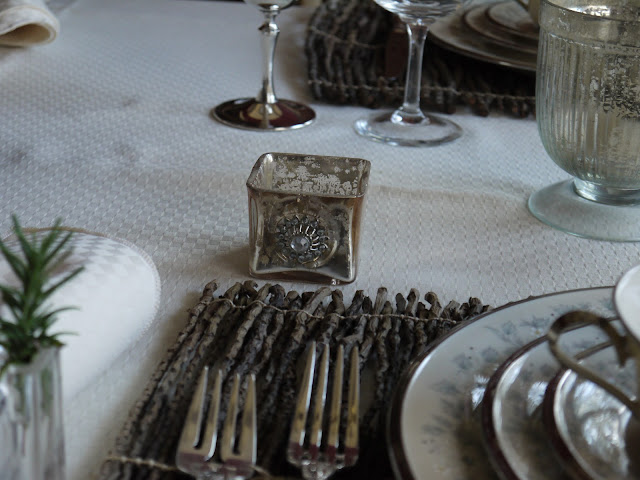 The view toward the entryway: 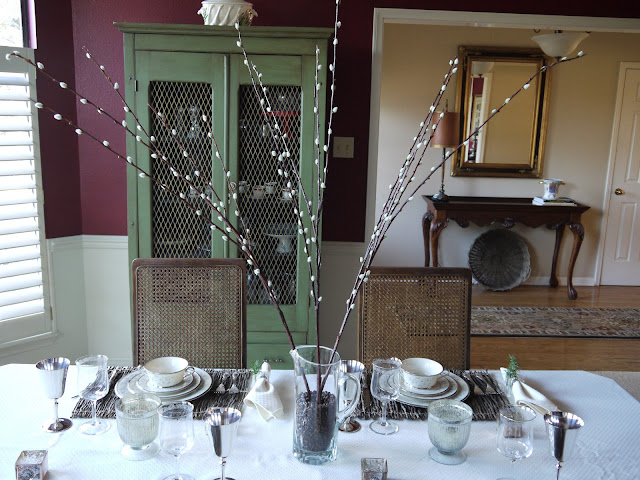 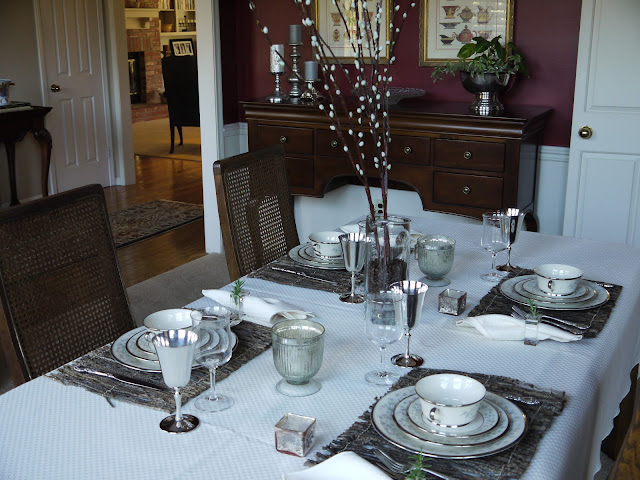 I like the juxtaposition of the twigs with the silver and china, but I miss the color that flowers add!  Oh, well -- spring will soon be here! 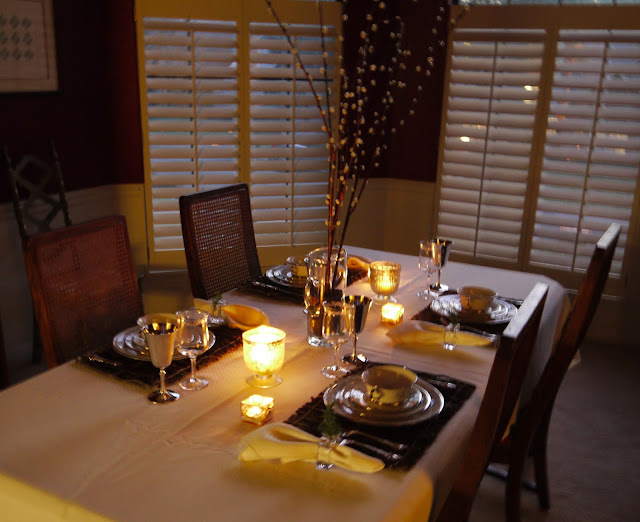 Thank you for visiting my table this week!
Posted by Tricia 25 comments

My table this week came together after my husband brought home yellow tulips.  It features a couple of Christmas gifts -- one from my husband and one from our daughter.  This unusual vase was in a HUGE box under the tree.  My husband saw it in a catalog and thought it looked interesting, so decided to surprise me.  It has six openings for flower stems, and makes a dramatic centerpiece. 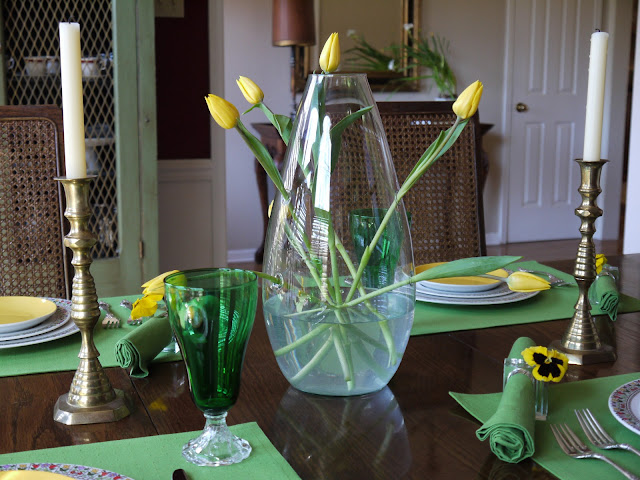 Here's a closer look at how the stems emerge from the vase. 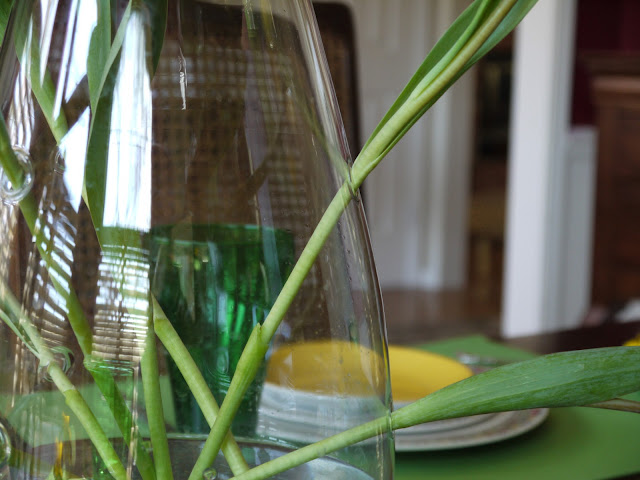 The other Christmas gift was a set of eight yellow appetizer plates from our daughter. 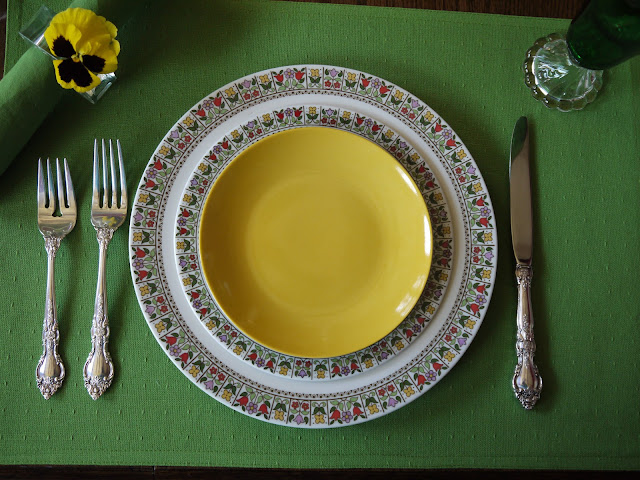 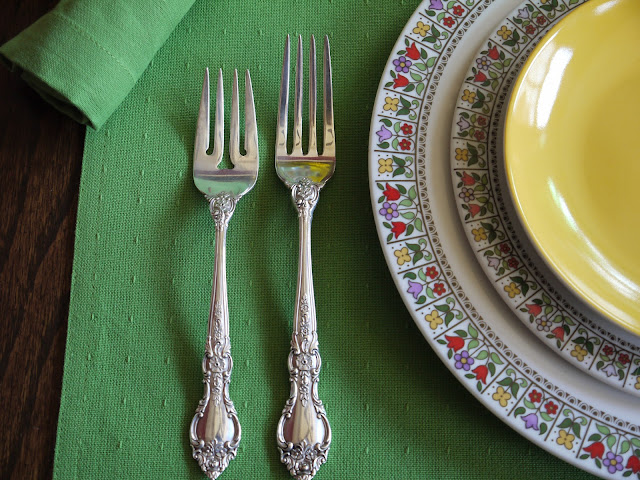 To continue the yellow and green theme, I chose the vintage forest green glasses that belonged to my husband's grandparents. 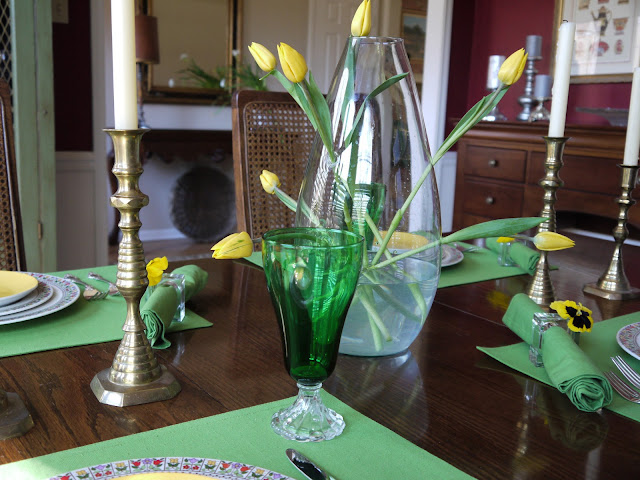 Since my pansies are blooming, I brought a few inside to add a little more yellow to the table, using my bud vase napkin rings. 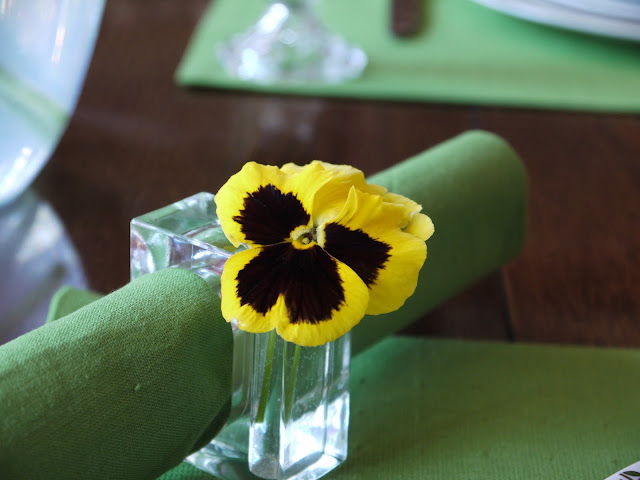 The Fireglow pattern features all kinds of flowers, so I decided two types of flowers on the table weren't too many! 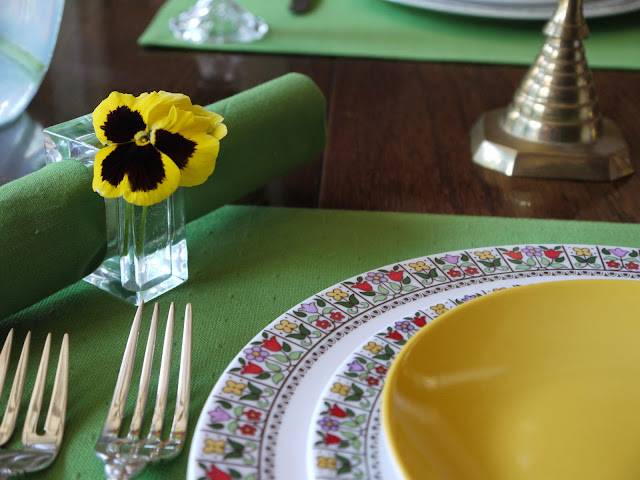 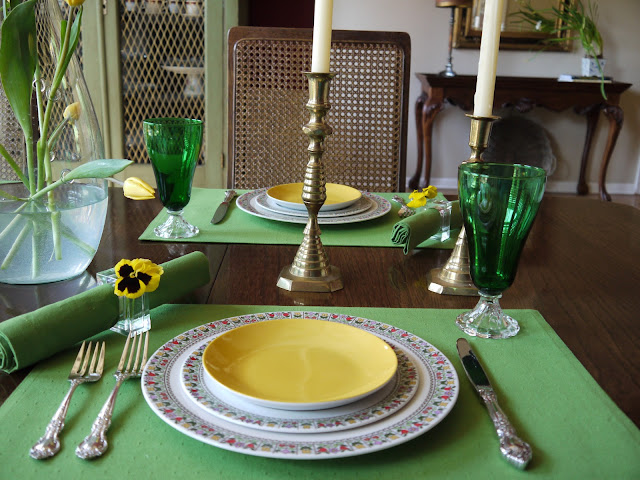 And a view of the table: 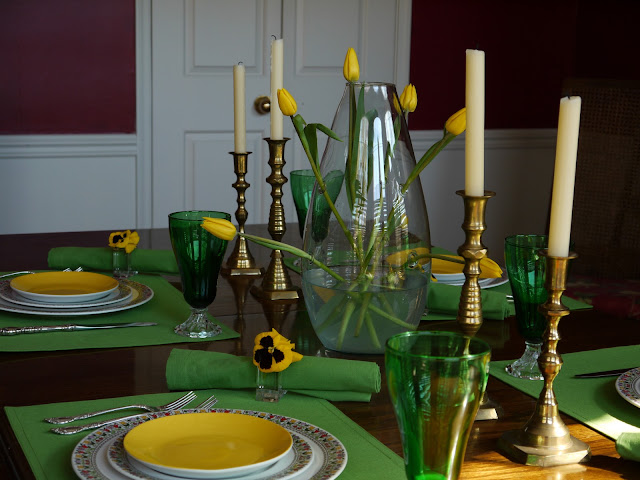 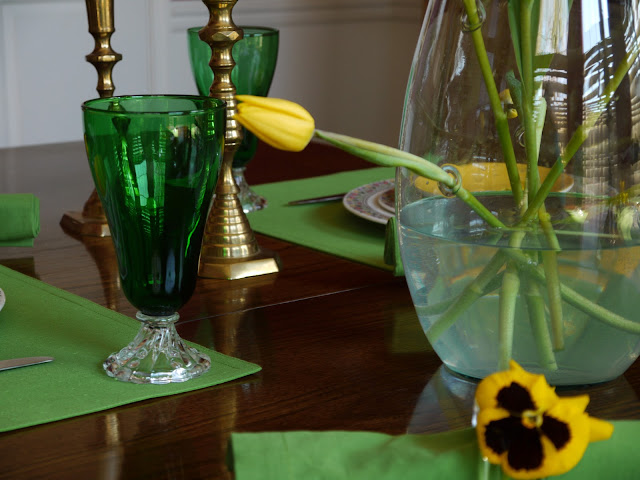 Here's a view of our dining room in mid-afternoon. 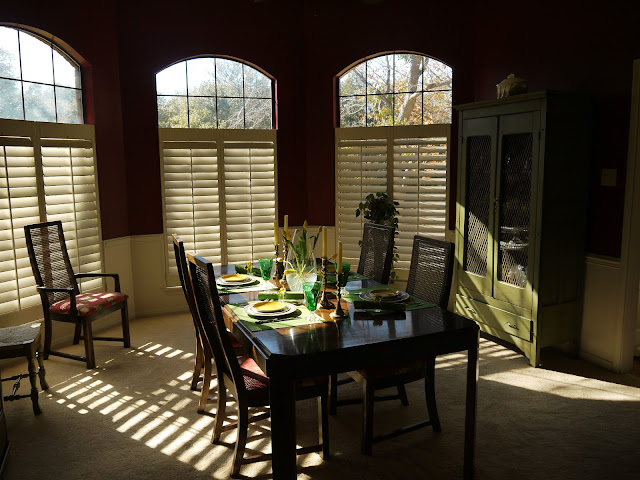 And I took one more photo the next day, after the tulips had begun to open a bit. 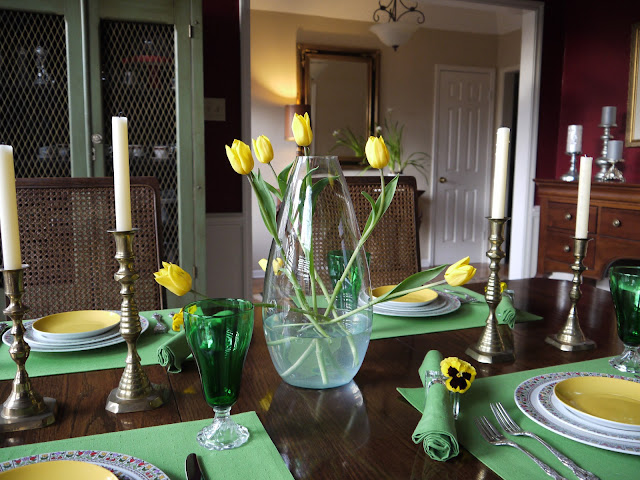 Thank you for visiting me this week!  I will be linking to:
Cuisine Kathleen
Between Naps on the Porch