I wanted to join the fifth annual St. Patrick's Day Blog Crawl at Cuisine Kathleen this year, so I started by pulling out my vintage green glassware.  The water glasses originally belonged to my husband's grandparents, and for Christmas this year, my mother surprised me with the little "liquor cocktails" to match.  The pattern is by Anchor Hocking and is called either "Burple" or "Inspiration."  I love the deep emerald green. 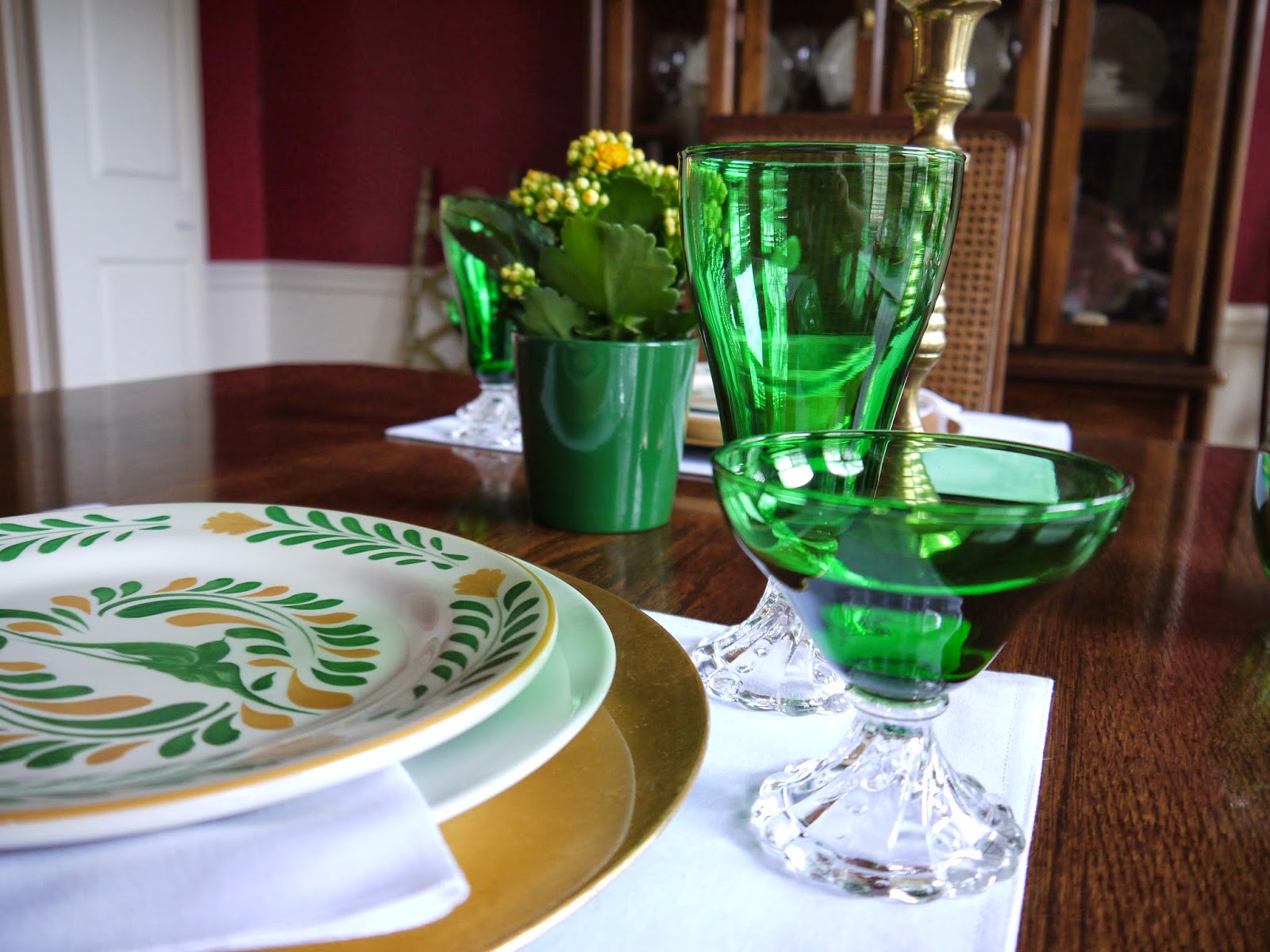 For last year's St. Patrick's Day table I used the same glasses with my grandmother's wedding china, so I wanted to do something different this year.  I remembered some Williams-Sonoma salad plates with a green and gold pattern, so pulled those out.  I layered them on top of a plain white dinner plate and a larger gold ceramic plate.  I used plain white placemats and white napkins with a simple cutwork design and added our silver flatware. 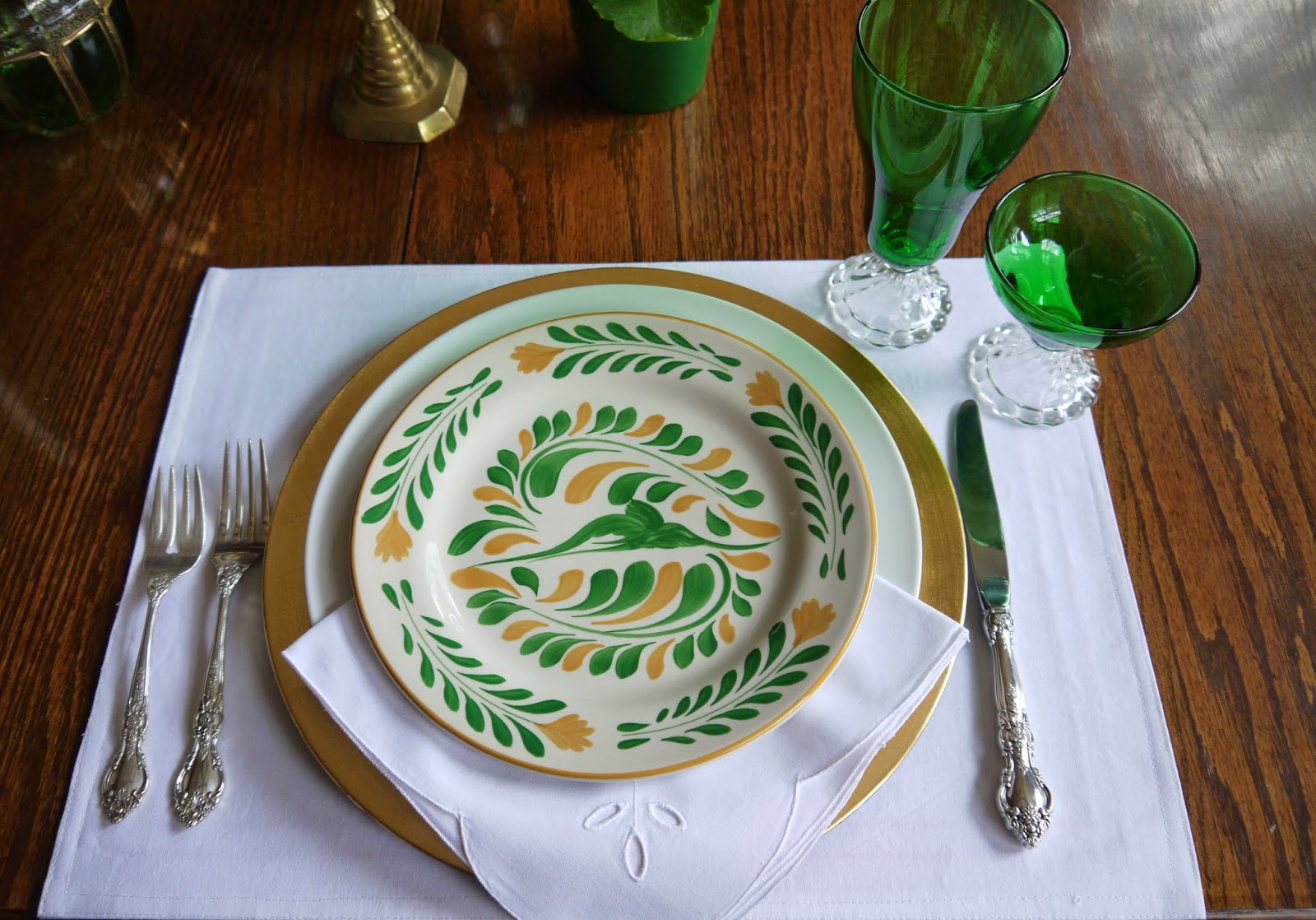 For a little more green, I added a gold-trimmed green glass piece from my in-laws' collection. 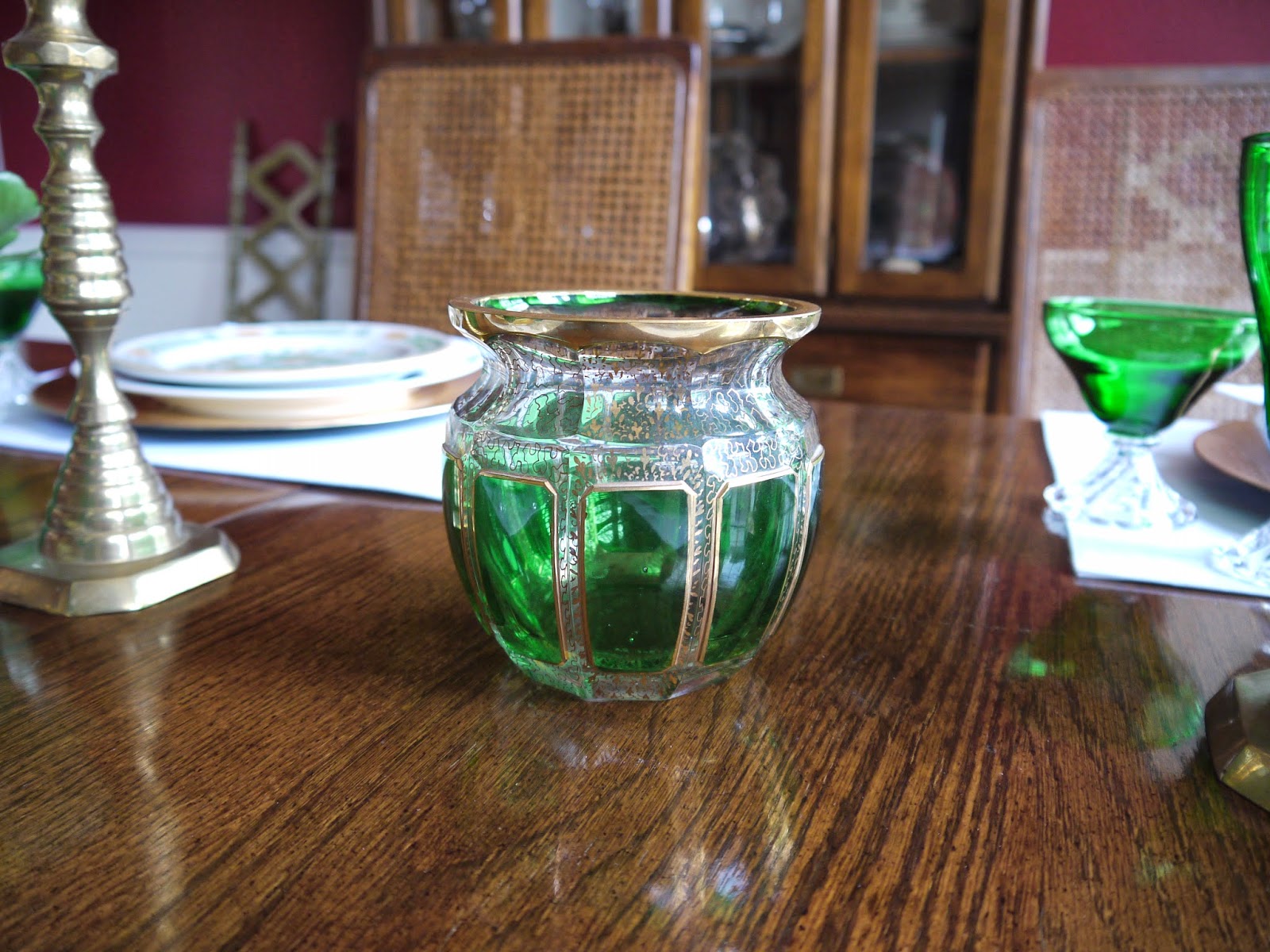 For flowers, I found two small pots of yellow kalanchoes at HEB and decided they could be "pots of gold."  They were just starting to bloom in this photo. 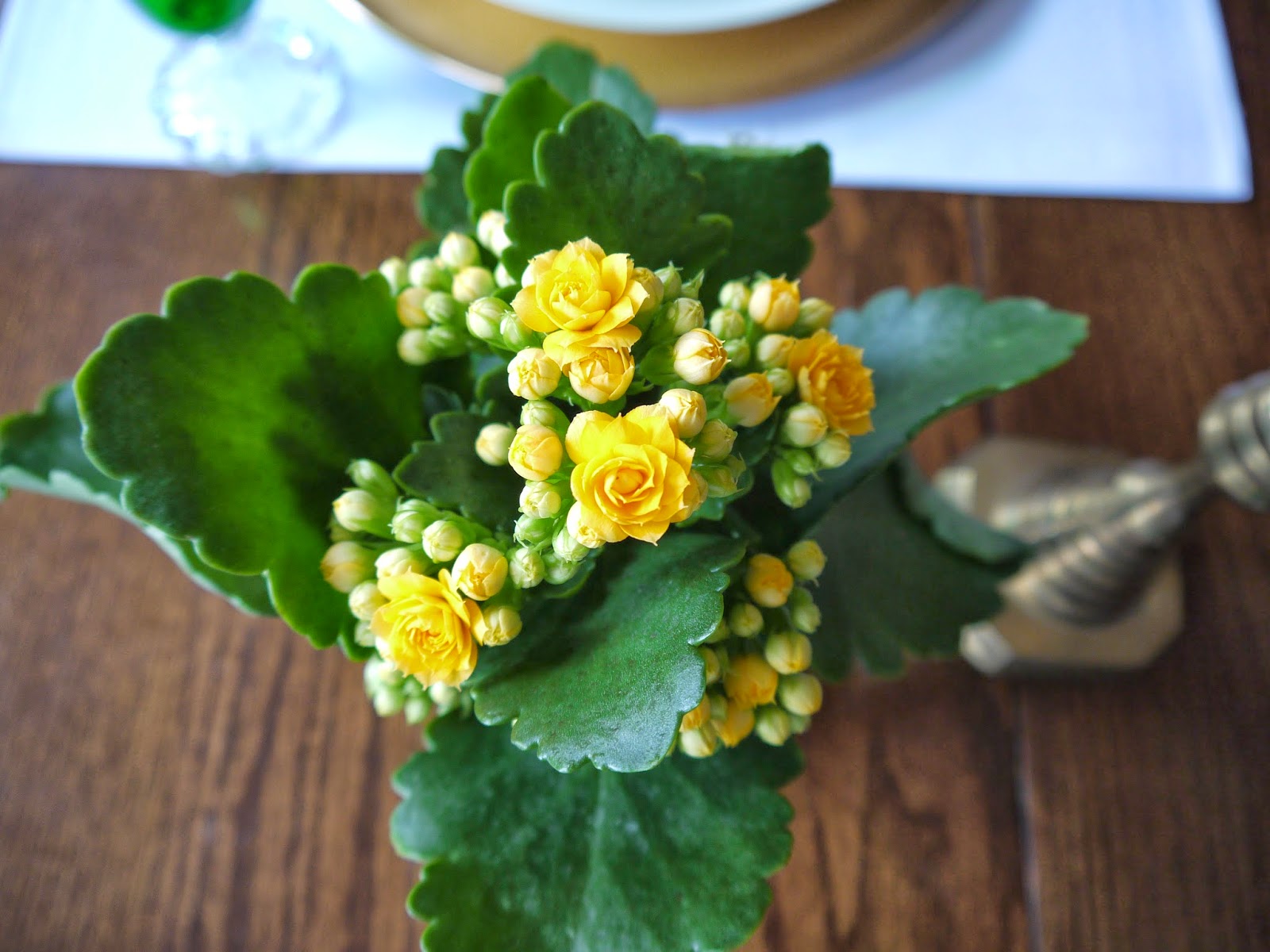 Here's a "diner's view" across the table: 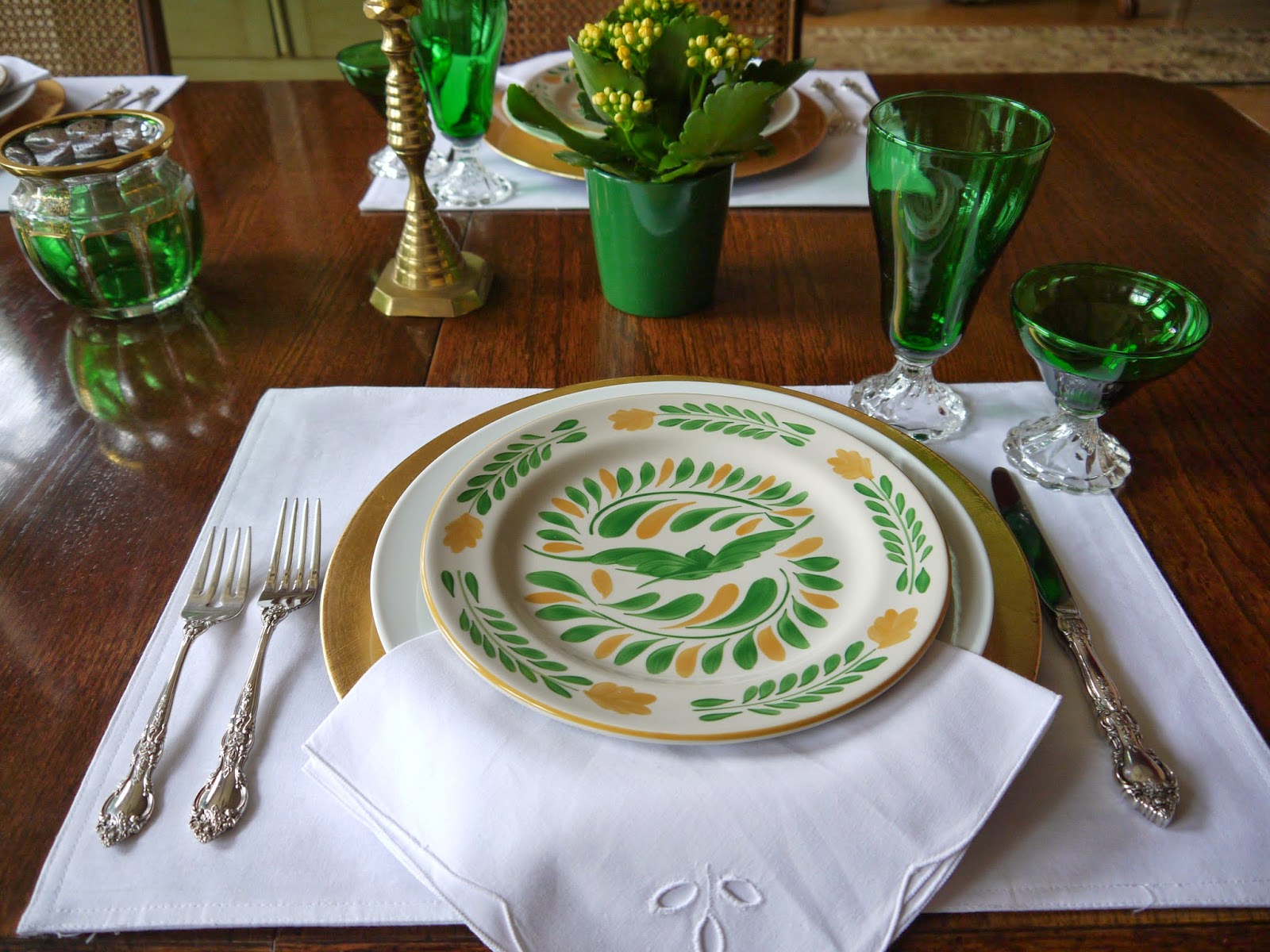 Here's a view of the table set for four: 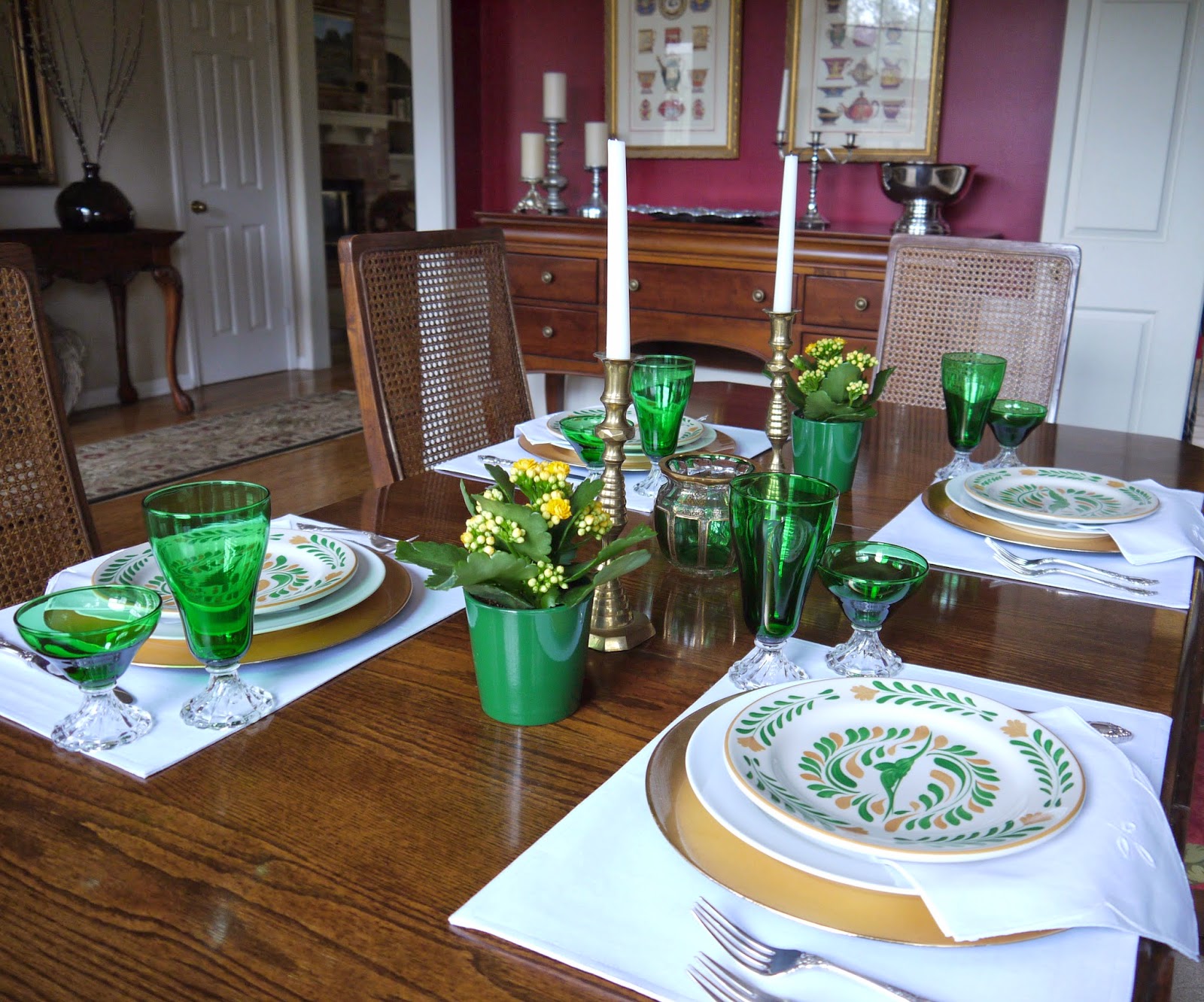 As the week went on, the kalanchoes opened up a bit more. 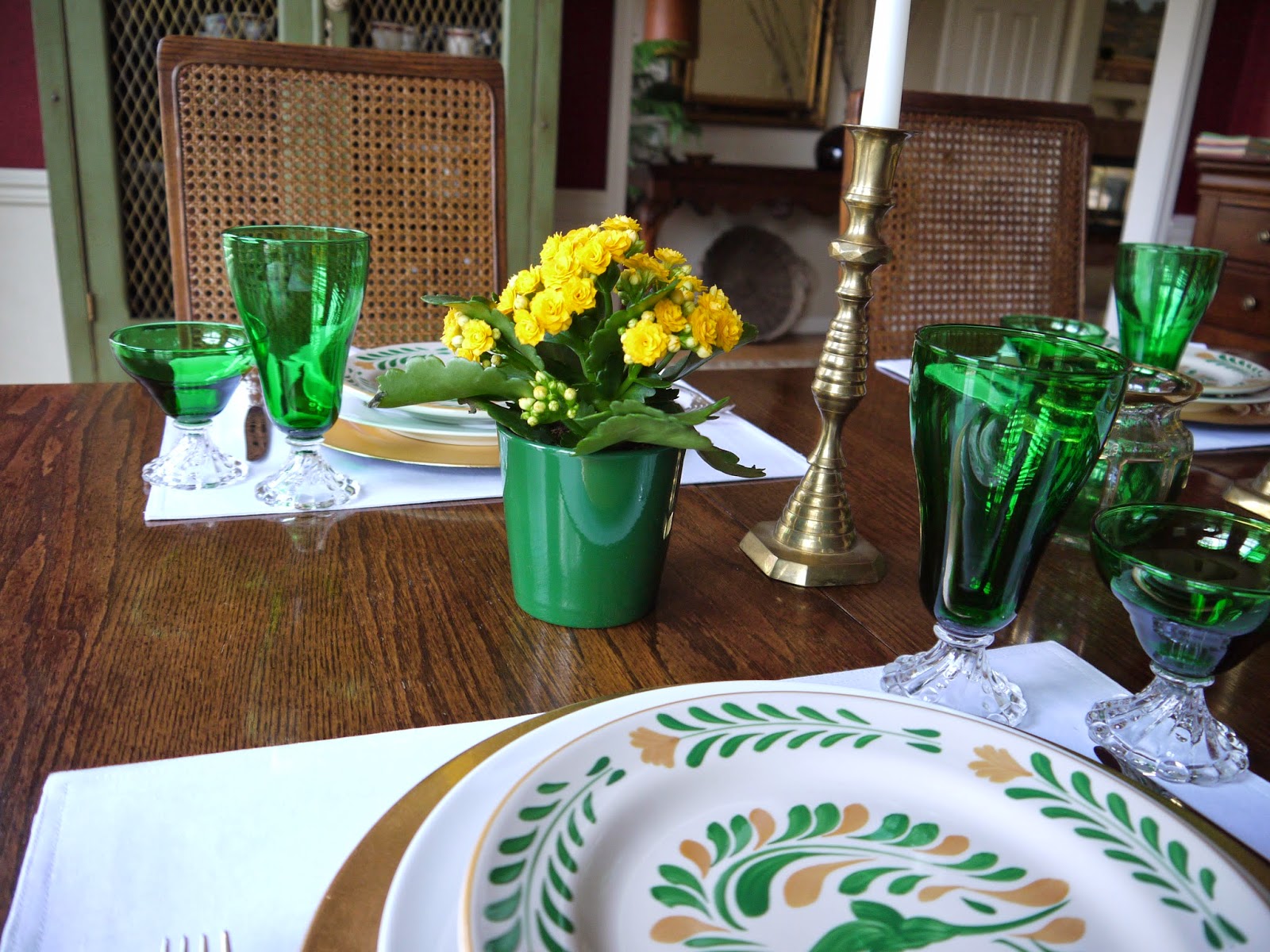 No shamrocks, leprechauns, or other traditional St. Patrick's Day elements on this table, but I hope all the green plus the pots of gold will qualify it for Kathleen's party!  Thank you for visiting my table this week!

There's a lot going on this week -- our son's birthday, Mardi Gras, and Ash Wednesday, but we can't forget Texas Independence Day on March 2nd.  What?  You don't celebrate that holiday?!  Well, I must confess that we didn't either until a few years ago.  As transplanted Texans, we didn't learn Texas history in school, so we were woefully ignorant of the fact that March 2nd marks both Texas' declaration of independence from Mexico (178 years ago) and Sam Houston's birthday.

But now we know, and so it was time to set a table honoring Texas.  This year I paired my Texas salad plates with some blue and white bordered plates in my collection. 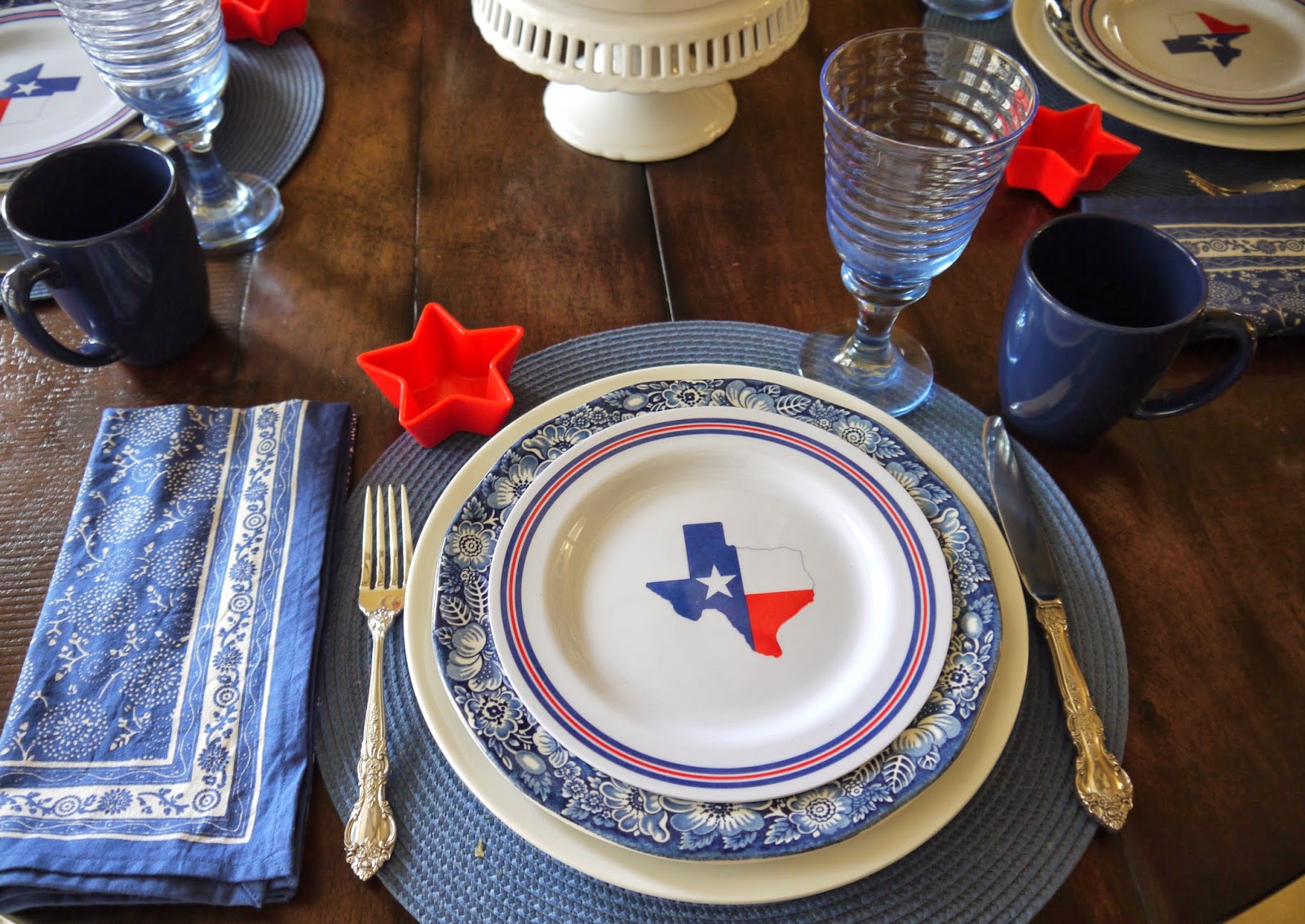 The little red star dishes and the Texas plates are from HEB, our grocery store, and the blue bandanna napkins were a gift from my Nashville sister.  The blue ribbed glasses were a gift from Marigene who blogs "In the Middle of Nowhere".  Aren't tablescaping friends the best?

For a centerpiece, I needed more red, so I bought some red gerbera daisies (again at HEB) and cut the stems short so I could use them in my pansy ring. 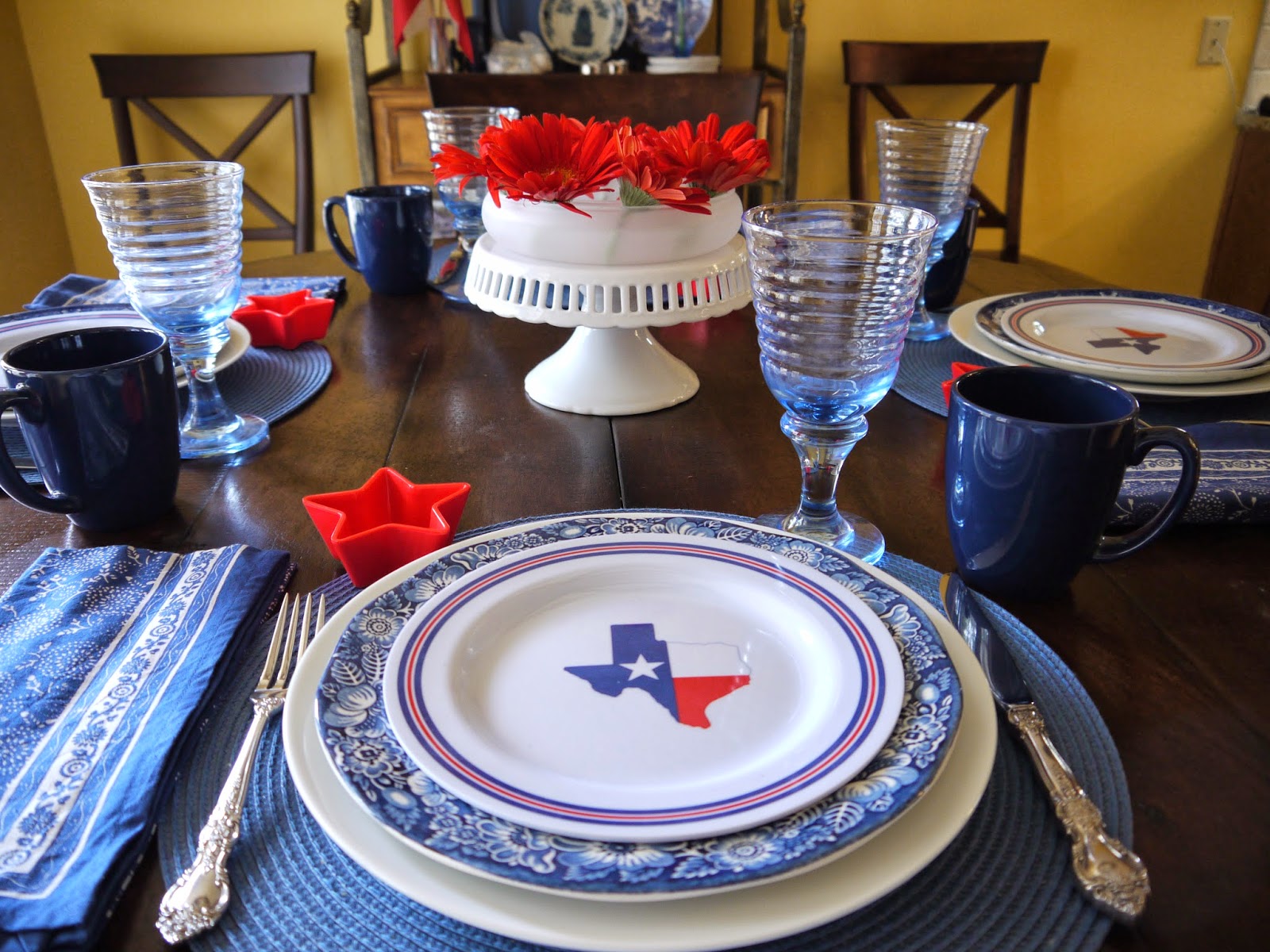 In the following photo, you can see over on the baker's rack the two Texas flags that my friend Michele, who blogs at Adventures in Thrifting, surprised me with this week. 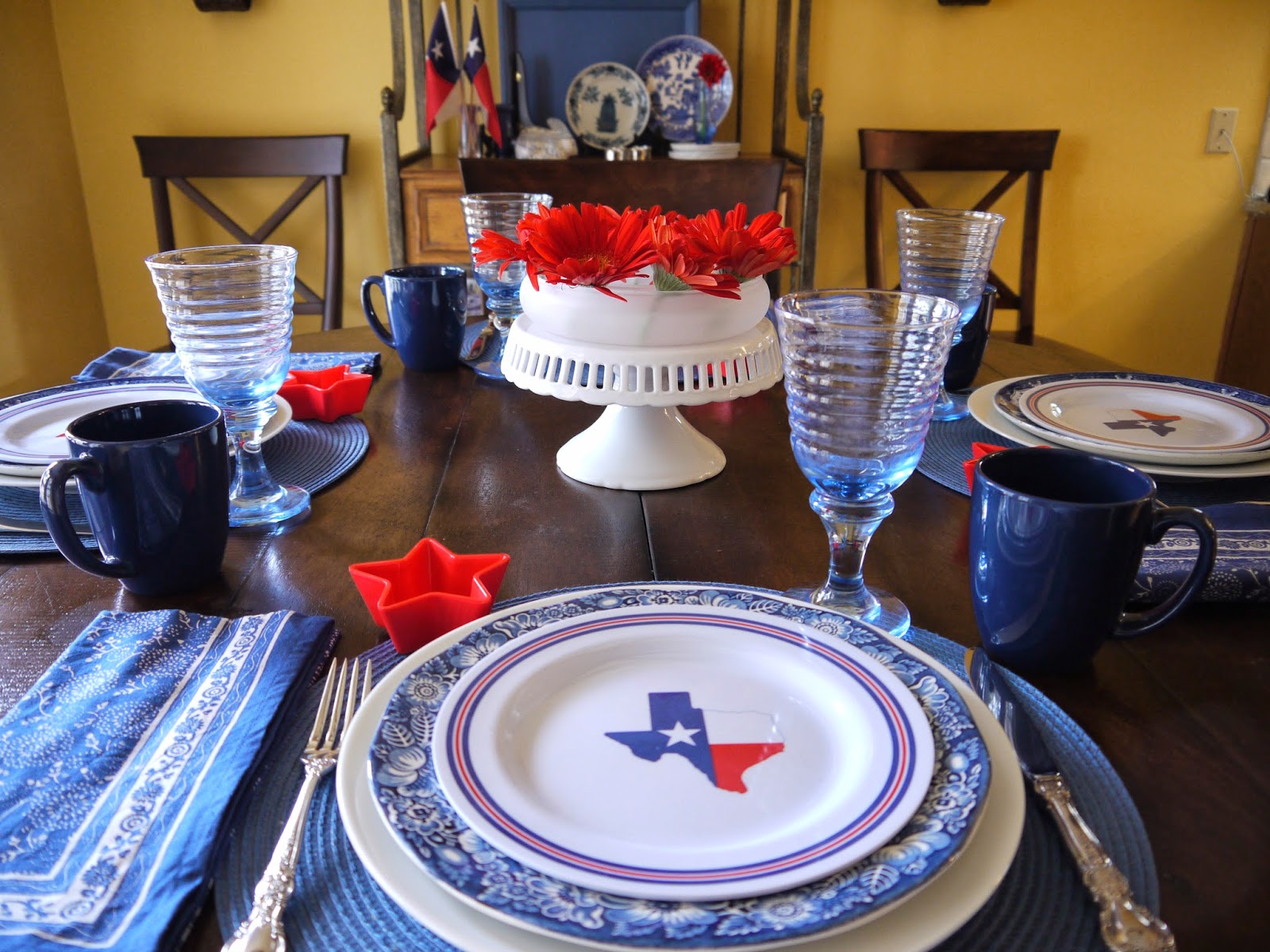 Here's a better view of the daisies. 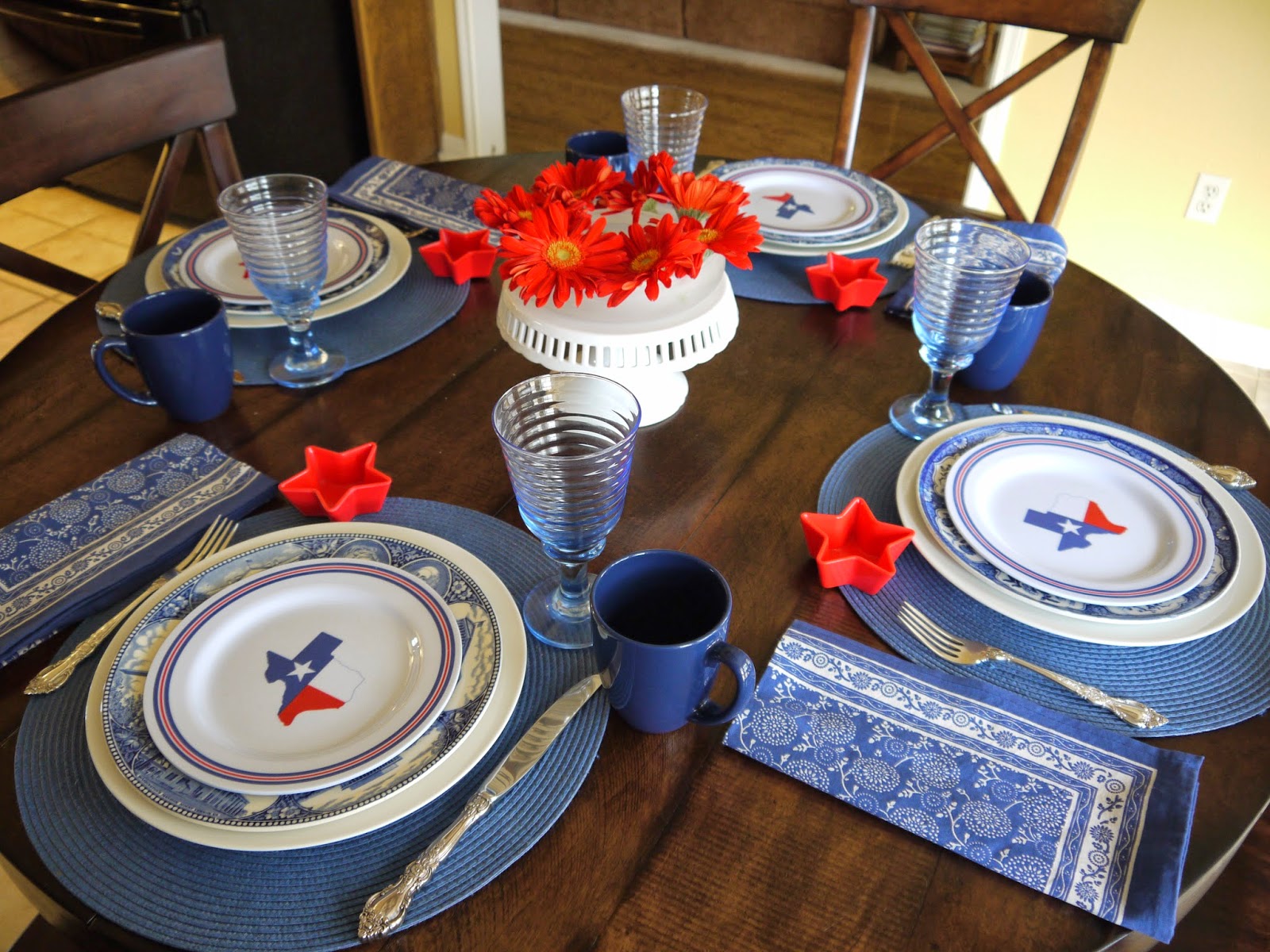 I like the way the napkin's design goes with the blue bordered plate. 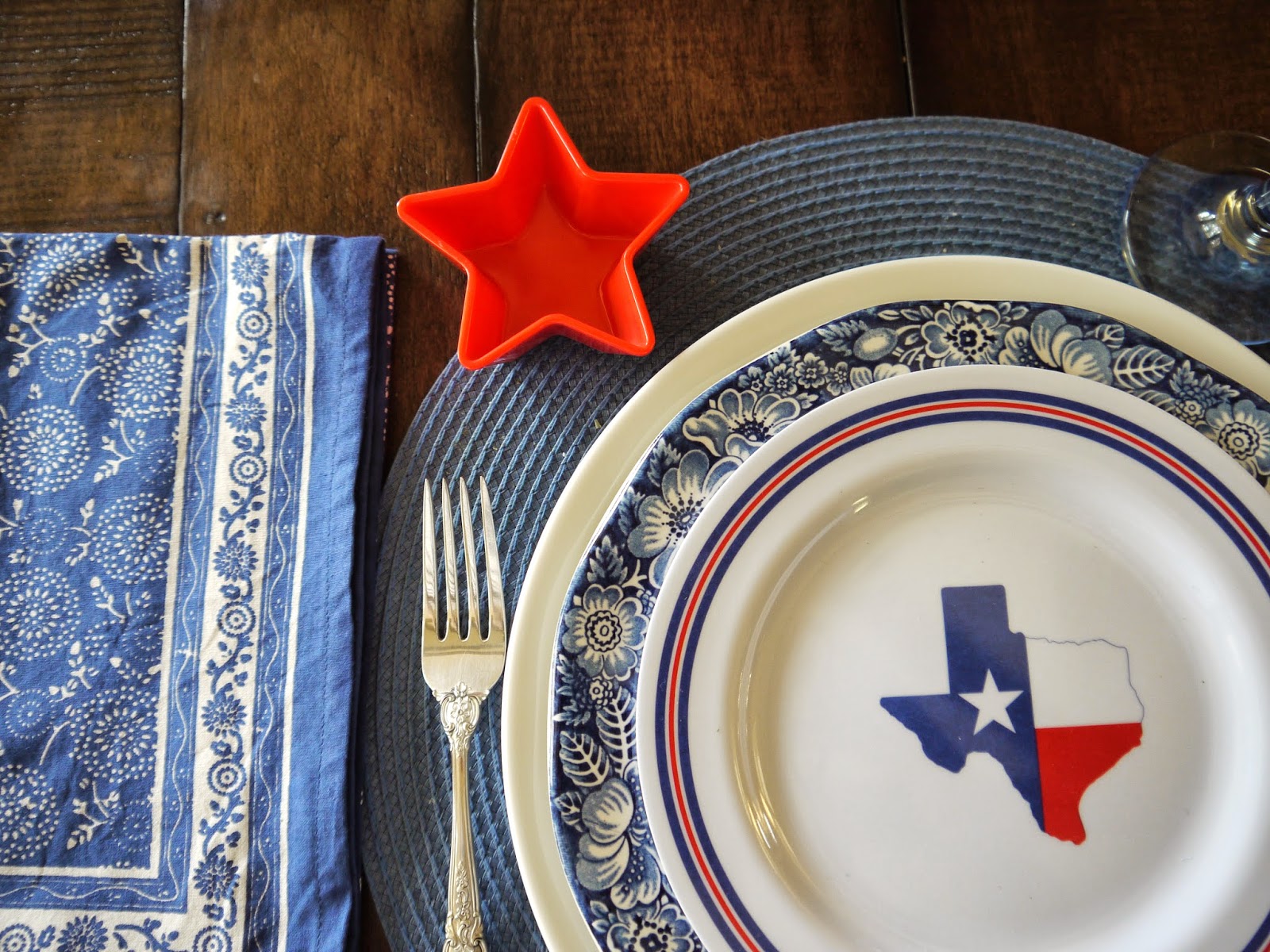 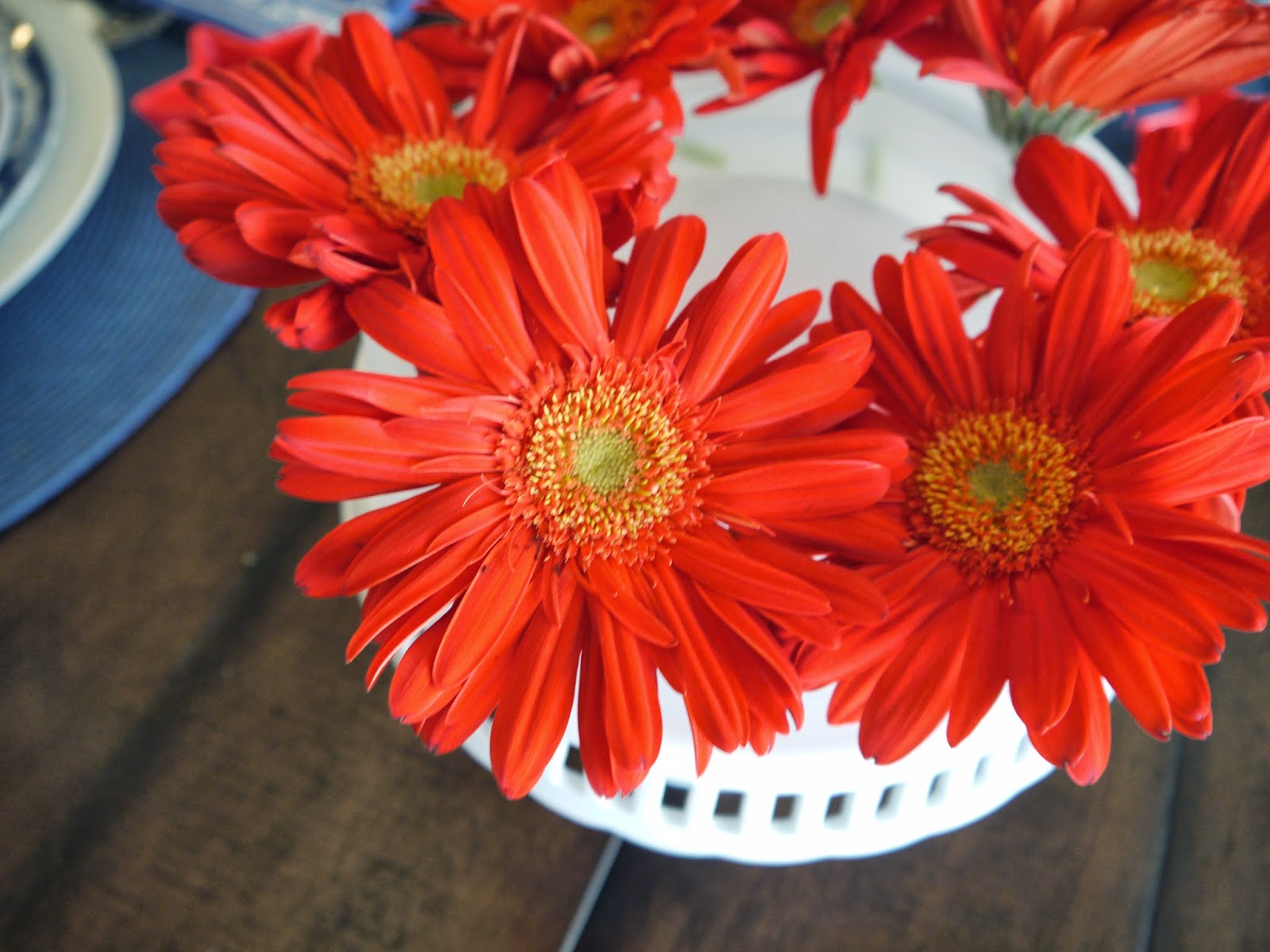 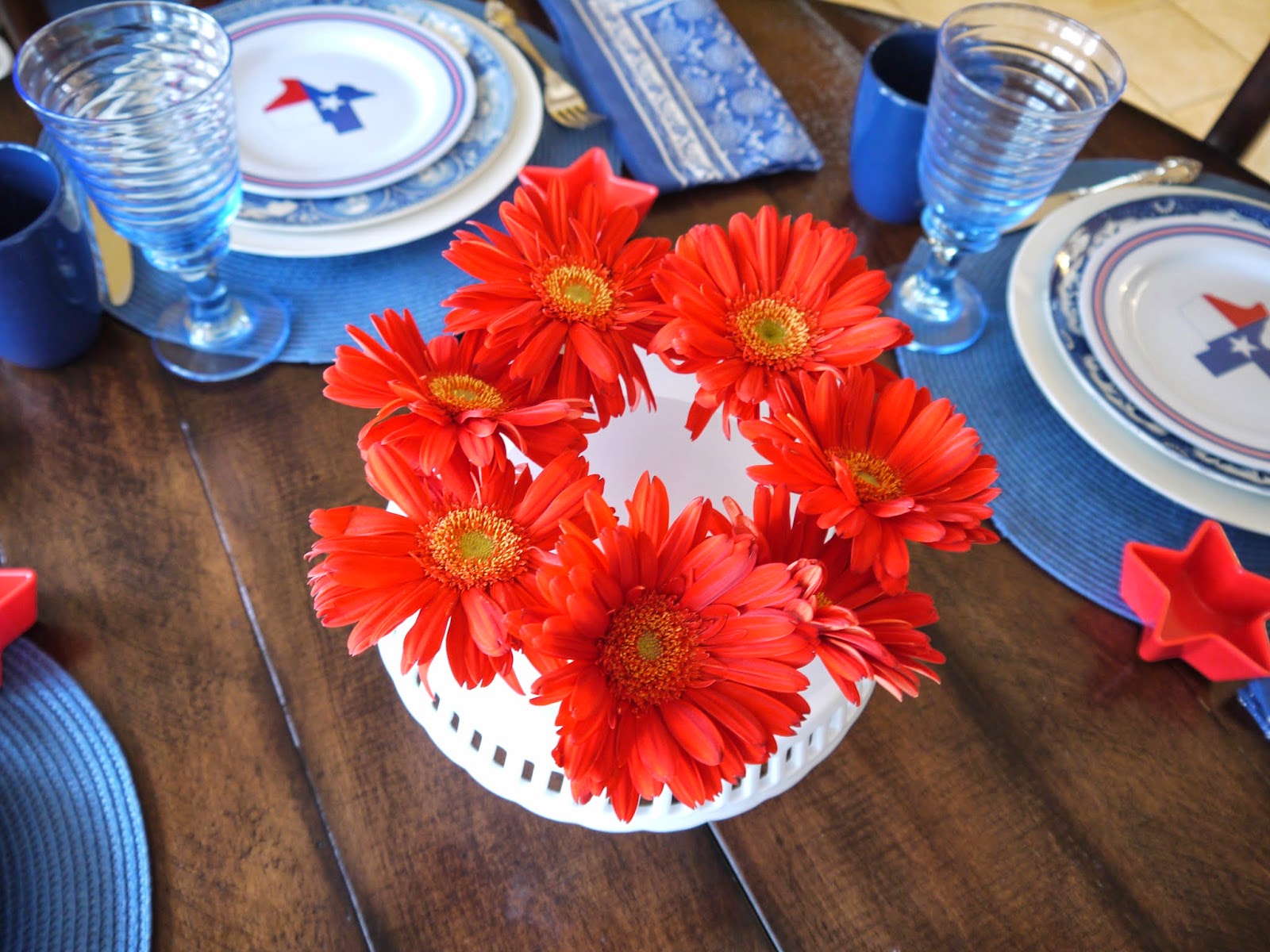 Thanks for stopping by!  I will be linking to Tablescape Thursday at Between Naps on the Porch, so stop by to see other tablescapes.  I wonder if anyone else is celebrating Texas Independence Day!
Posted by Tricia 12 comments