For this week's Tablescape Thursday at Susan's Between Naps on the Porch I am featuring my original everyday china, selected as a bride in 1972, and some new table linens that were an incredible deal at Bloomingdale's Home store in Chicago.  The china is Royal Doulton's Fireglow, and I still  like it, even though I moved on to a different everyday pattern after my 25th anniversary. Fireglow was one of the early freezer-to-oven-to-table patterns, and I like its cheery floral border.  I even had kitchen wallpaper to match in one house we owned in Tallahassee back in the 80s! 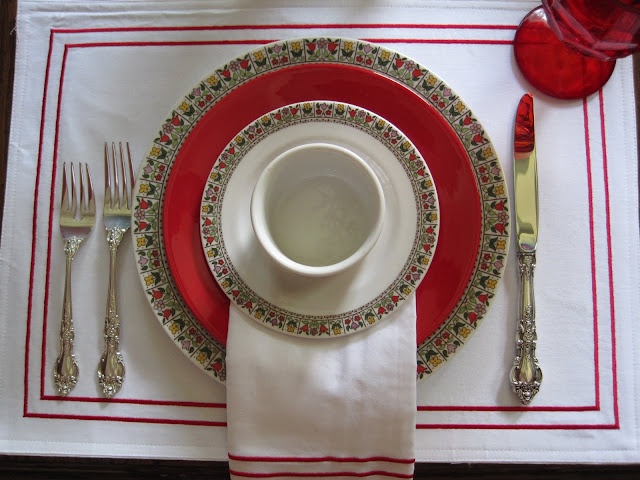 Here's a close-up of the pattern.  I've tended to use red placemats and napkins with it, but green also works well.  Today I've layered a red salad plate from Bed, Bath & Beyond with the Fireglow dinner and bread & butter plates, atop the new placemats. 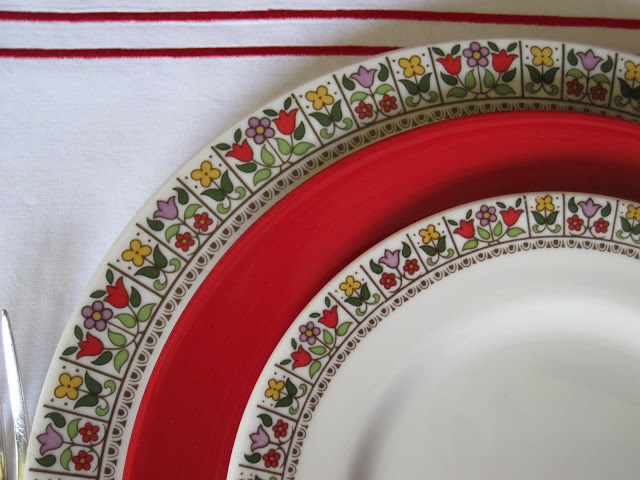 The linens were an amazing deal.  When I was in Chicago recently for a conference (with a few days of shopping tacked on), I visited the always-wonderful Bloomingdale's Home store. (I think Heaven will be somewhat similar!)  I enjoyed browsing the china and table linen departments, and at the checkout desk, I spotted a stack of these placemats and napkins with a sign reading "$1.99."  I had seen the same linens back in late December when we were there to celebrate our 37th anniversary, but the prices were still way too high for the likes of me.  In true Dull & Dutiful fashion, I waited patiently by the stack of linens until the salesman finished a complicated transaction with the woman ahead of me, then asked, "Are these REALLY $1.99 each??"  He assured me that was correct, whereupon I gleefully grabbed eight placemats and eight napkins, then gave him my 20%-off-the-sale-price coupon!  Here are the original and marked-down prices for the placemat... 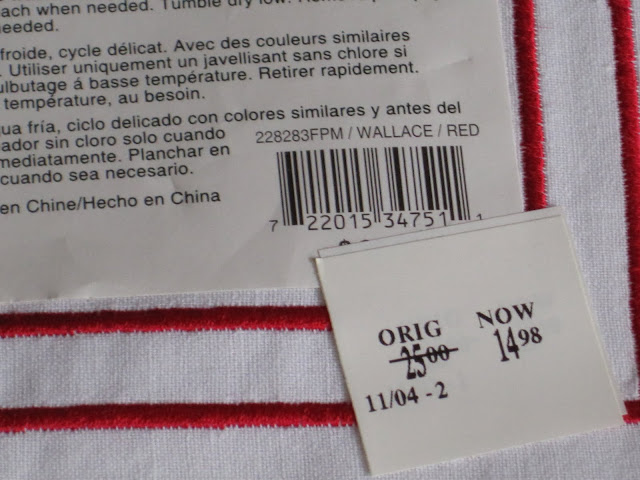 and for the napkin: 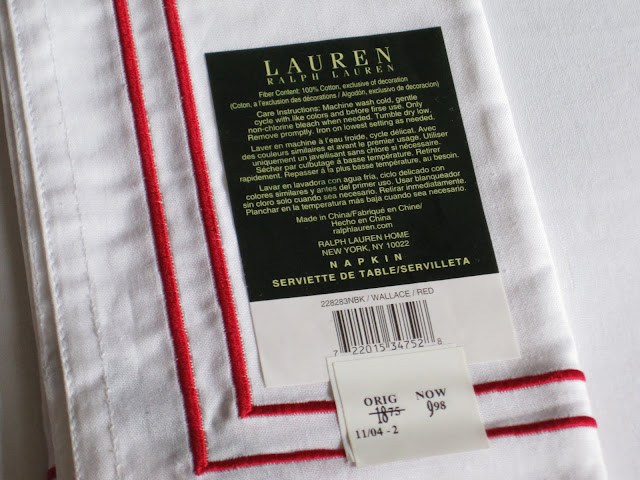 I can't even conceive of anyone being able (or willing) to pay the original prices for these placemats and napkins, but for $1.99, I was there!

Here's a view of the table, which includes Georgian-Ruby (by Viking, now discontinued) water glasses, a red lantern purchased recently at Pottery Barn in Austin, and some preserved boxwood topiaries from the Williamsburg catalog. 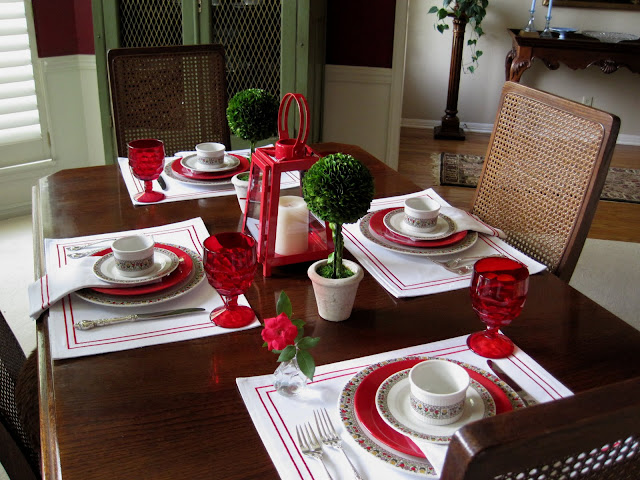 The little ramekins are favorites of mine -- so versatile! 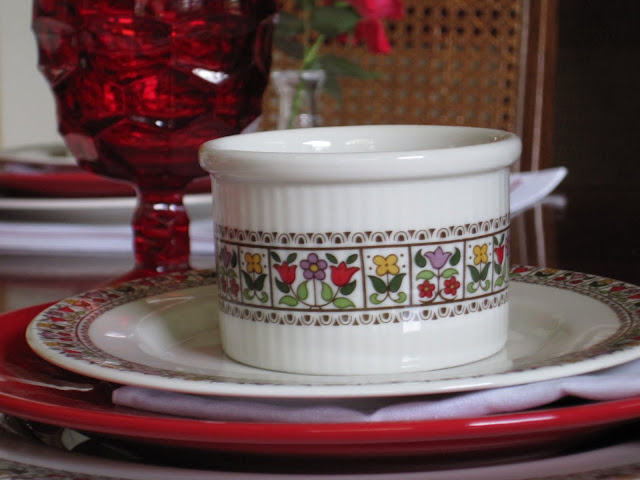 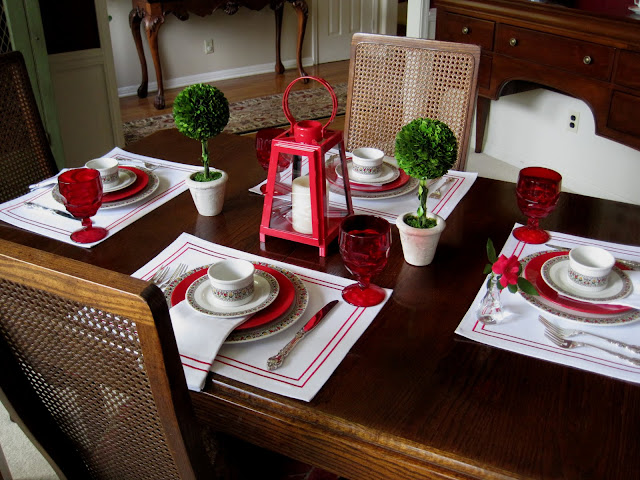 Here's the guest of honor's view, distinguished by a rose from one of our Knockout rose bushes. 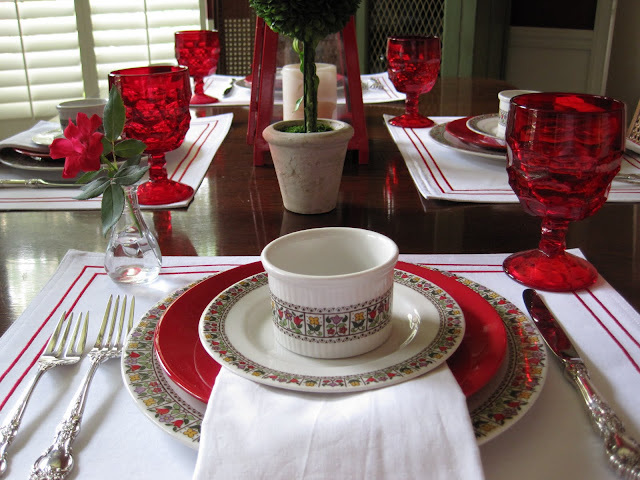 Here's a closeup of the rose: 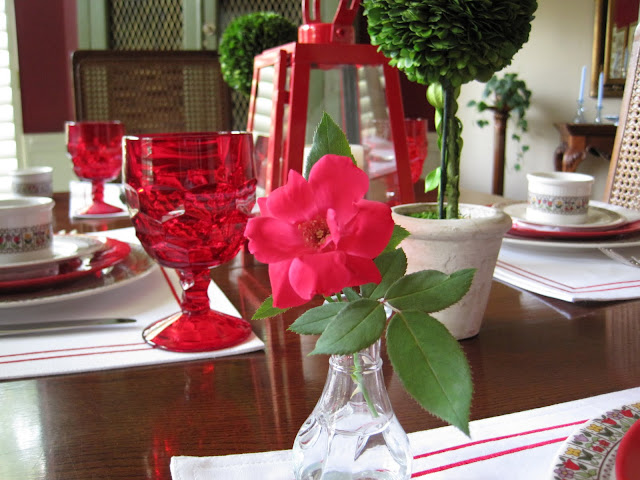 Here's the best bird's eye view of the table I could manage.  I don't know how the rest of you do it, but I'd have to hang by my knees from the ceiling fan to get high enough to snap the whole tabletop unless I used a ladder, and my recent foot surgery precludes that option for now. 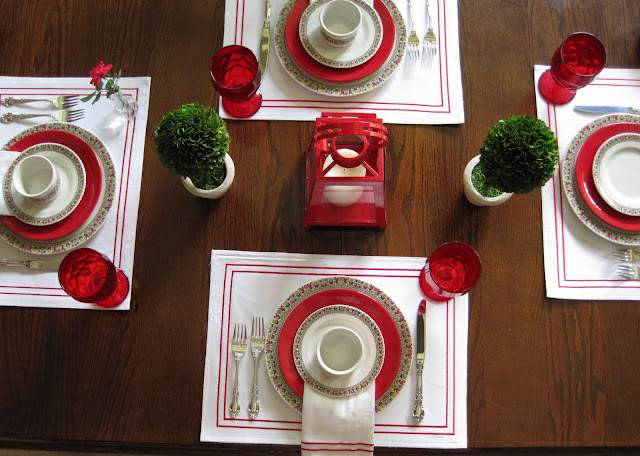 I like this bird's eye view, which includes the centerpiece elements and parts of the placesettings: 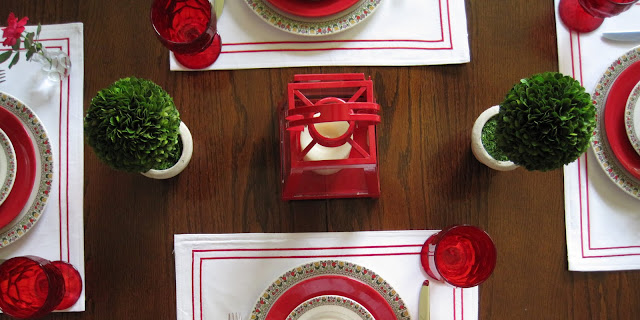 And here's one last view of the table from another angle: 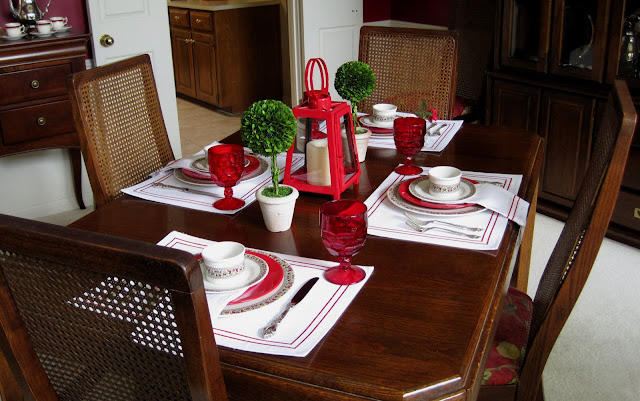 Thanks for visiting!  I love to get your comments, and please also stop by Susan's Between Naps on the Porch to see some beautiful tablescapes.