My good friend Michele reminded me that it was time to set a table to celebrate Texas Independence Day on March 2nd, so I got busy.  For you non-Texans, that date marks the 177th anniversary of Texas' declaration of independence from Mexico.  March 2nd was also Sam Houston's birthdate, and it is celebrated along with independence as a state holiday.  Some state workers get the day off, I understand, and there are festivals in many towns and cities.  As I've mentioned before, I'm a native of Arkansas, but we have lived here longer than in any other state, so I guess I can claim to be a Texan now, too.

The table began with the same melamine salad plates I used for my table two years ago, found on sale at HEB, our beloved Texas grocery chain.  I wonder if other states sell similar plates, or if this is a Texas thing.  Things ARE different here!  I layered the salad plate with a white dinner plate and red luncheon plate. 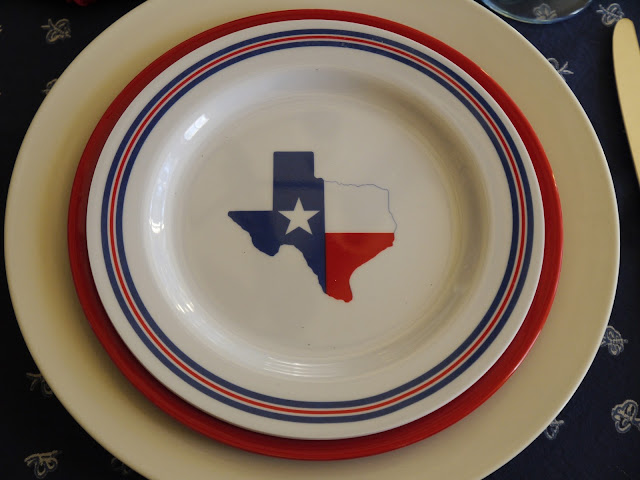 I chose a blue and white tablecloth as a backdrop for the placesetting. 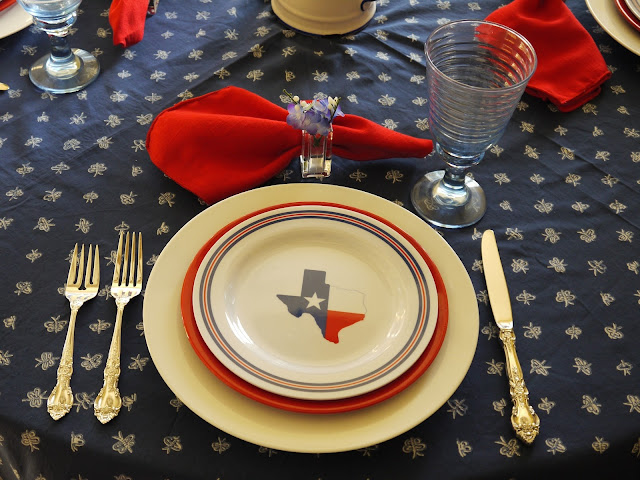 I tried red glassware and a different blue pattern, but I decided this one looked best.  The four goblets were a gift from Marigene who blogs In the Middle of Nowhere.  After I admired her set, she insisted they were "everywhere" in thrift stores in her area and very kindly sent me some.  Thanks again, Marigene! 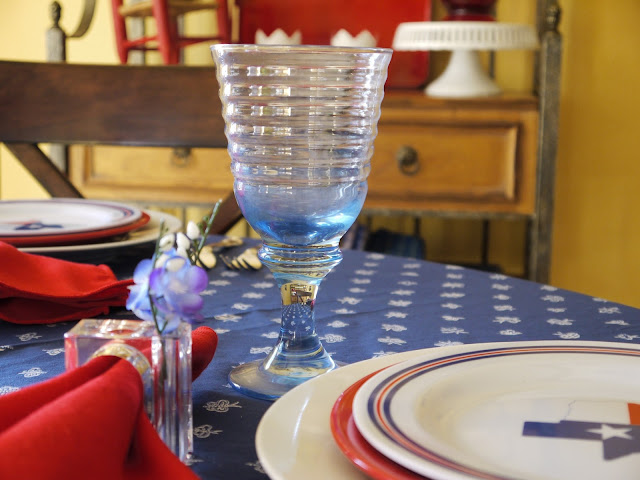 Alas, it's too early for our bluebonnets to bloom, but a Texas table needs them, so I made do with some faux ones in my bud vase napkin rings.  Here you can also see the pattern on the tablecloth -- I'm calling the little critters Texas mosquitoes. 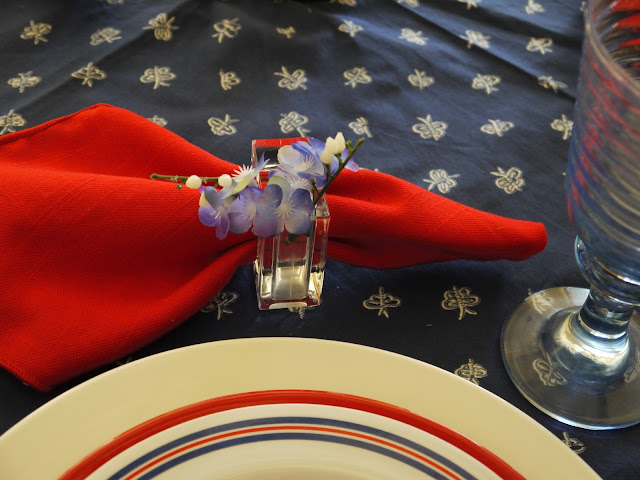 I had just polished my silver, so decided to use it, even with melamine plates. 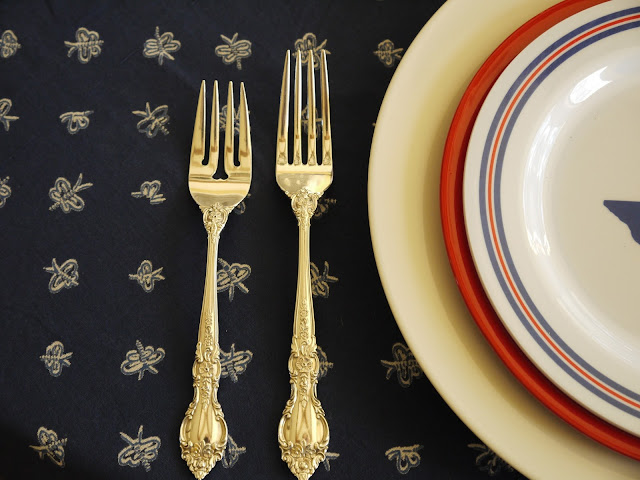 More faux bluebonnets in a chippy pitcher served as an easy centerpiece. 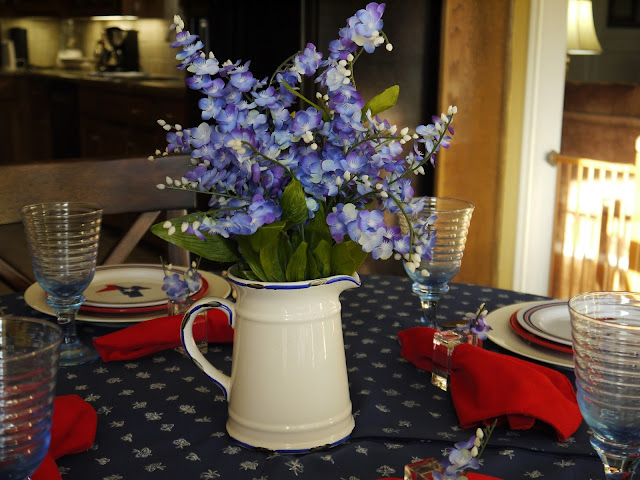 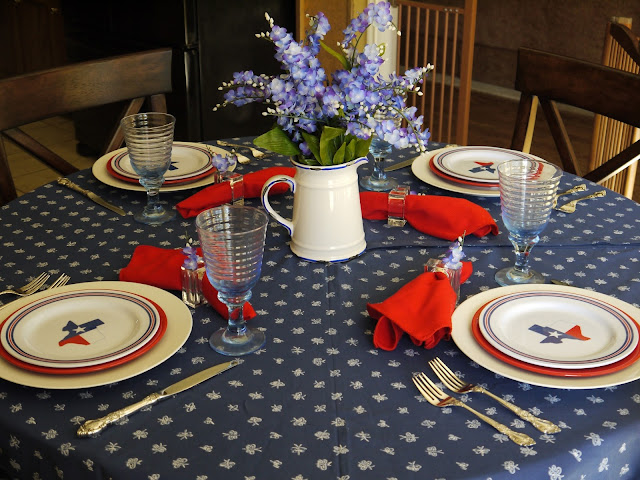 To carry out the theme, I made shortbread cookies from Yvonne of StoneGable's recipe in Texas shapes.  (The little ones are ten-gallon hats, if you don't recognize them!)  I wonder if the other states all have their own cookie cutters?  I know Louisiana does, because I have a set from the time we lived there.  The cookies turned out to be easy to make and delicious -- not too sweet!  I served them with Texas' own Blue Bell ice cream in cherry vanilla flavor.  Yum! 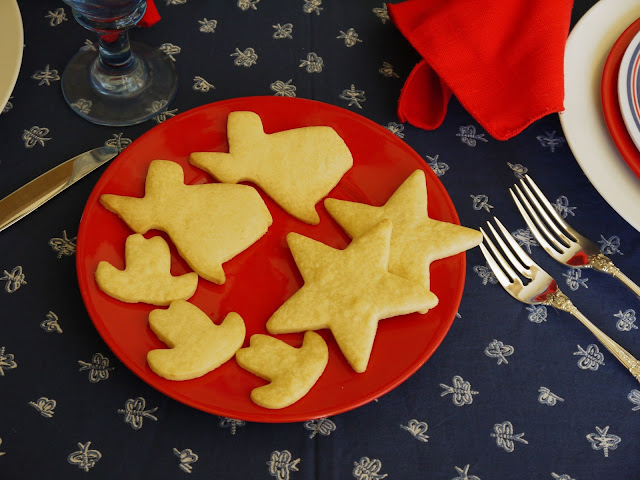 Thanks for stopping by to celebrate Texas Independence Day with me!  I will be linking to Let's Dish at Cuisine Kathleen and Tablescape Thursday at Between Naps on the Porch.