A Table for Presidents' Day

Before I began visiting Tablescape Thursday at Susan's Between Naps on the Porch, it would NEVER have occurred to me to set a special table for Presidents' Day.  For one thing, we don't get that day off, so it's just a regular work day, albeit it one without mail service.  But when I unpacked some blue and white souvenir plates from my mother-in-law's collection, I realized I had the basics for a Presidents' Day table.  (Since they are souvenirs, we'll remove them and use the white dinner plates for the meal!).

All four plates have a different design.  The first one features Martha and George Washington, the Capitol, and several other scenes from Washington, D.C.  When I Googled the markings on the back of the plate, I was surprised to find one just like it listed for $135!  It's described as a flow blue souvenir plate made in Staffordshire, England, "imported exclusively for the Capitol Souvenir Company." 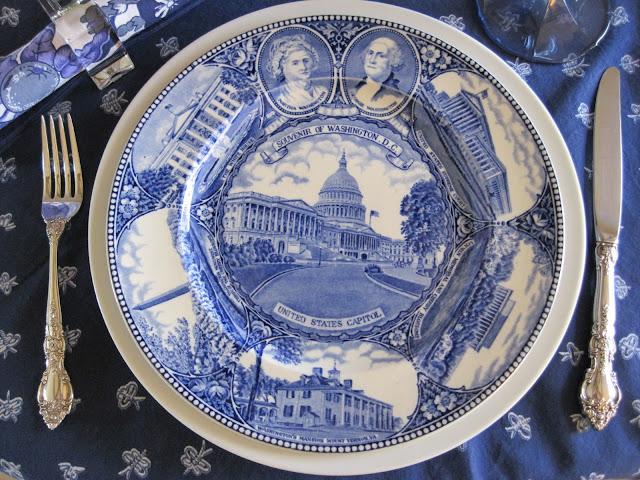 The second plate features Abraham Lincoln, and Googling the marks on the back yielded the information, "This is a fine Dutch flow blue souvenir plate commemorating President Abraham Lincoln’s death. The words under the Lincoln portrait read: “Abraham Lincoln/Born February 18, 1809, Died April 15, 1865”. The back of the plate says Lincoln’s House, Springfield, Illinois over the Sphinx mark of Petrus Regout and Co. Maastricht." The plate is listed for $78. 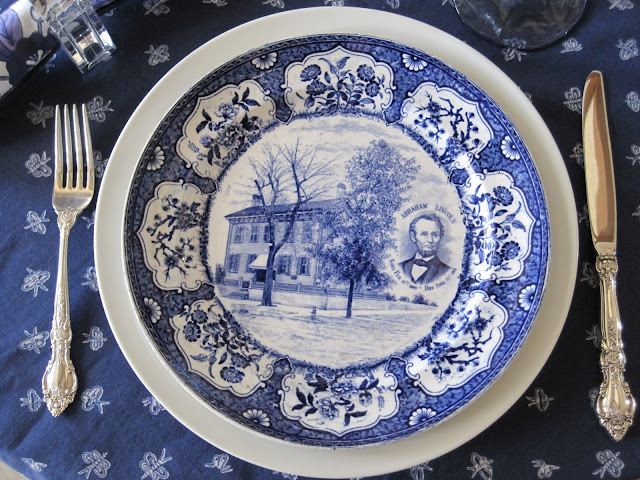 The third plate has a very similar, though not identical, border design, but features George Washington and Mount Vernon.  I was unable to find any information online about it, although the markings indicate the same maker as the Lincoln plate. 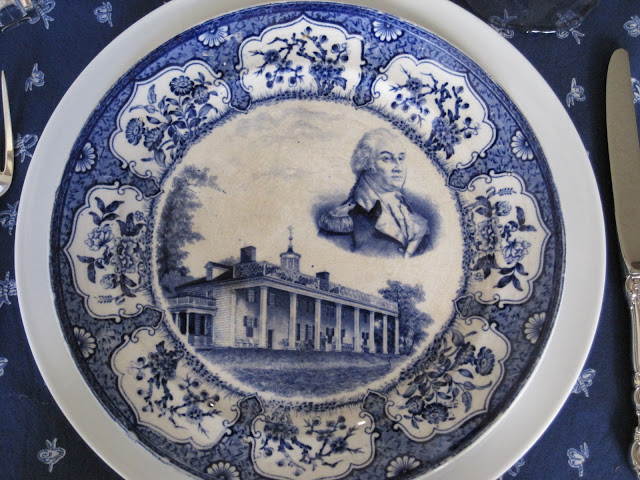 The fourth plate features Independence Hall in Philadelphia and is by Liberty Blue.  It is in plentiful supply online, but I really like the border design. 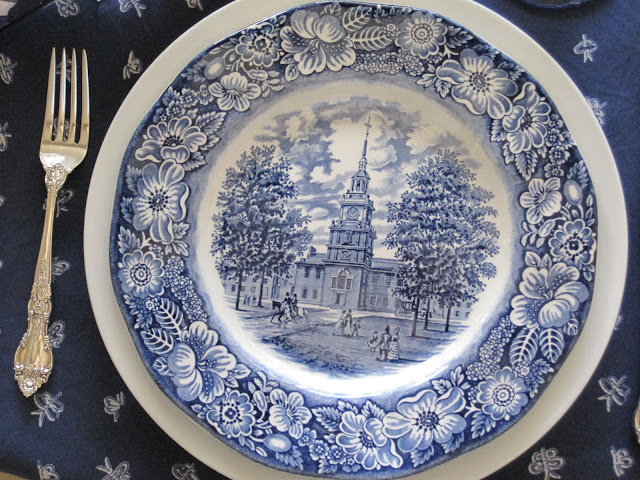 So, there's plenty of blue and white for a Presidents' Day table, but we need some RED!  My in-laws gave me this pretty blue and white cachepot from the Williamsburg catalog one Christmas, and a few carnations supply the red. 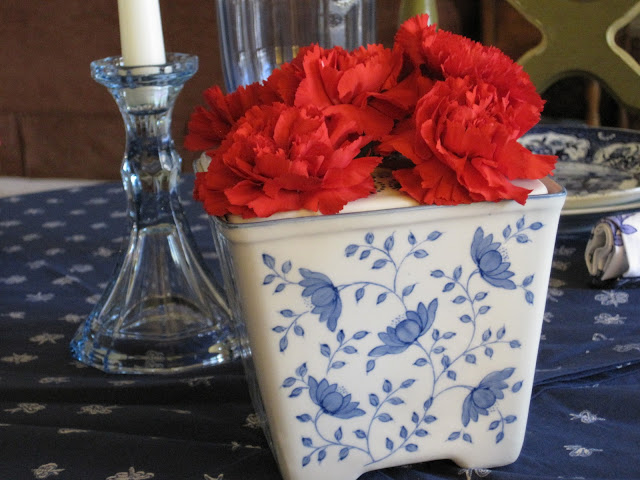 And we need a little MORE red, so I added the napkin rings my daughter gave me this past Christmas, each holding one red carnation. 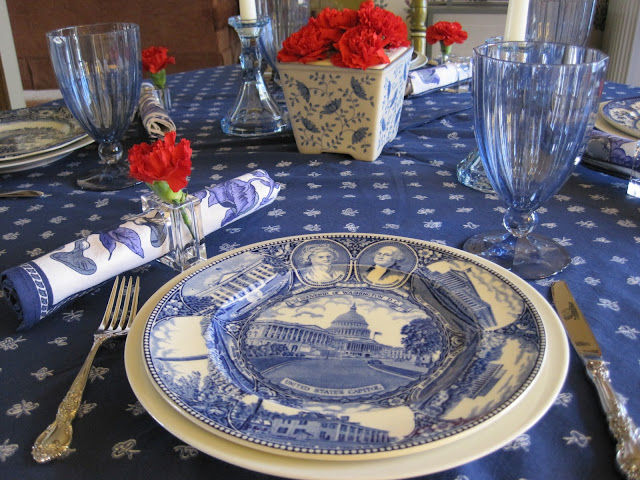 Here's a look at the whole table.  The tablecloth is from Williams-Sonoma, and it's designed to fit my patio table.  If you look closely, you can see the buttoned seam that allows it to fit around an umbrella. 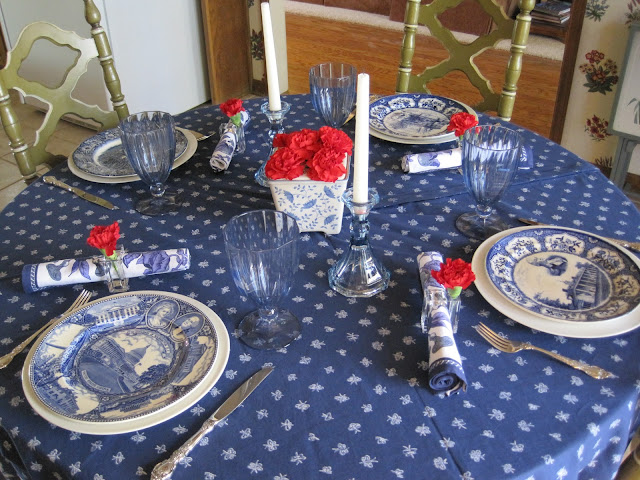 Once again, I'm using the new-ish blue Villeroy and Boch water glasses, as well as some blue glass candlesticks that my mother gave me years ago.  I think they work well together! 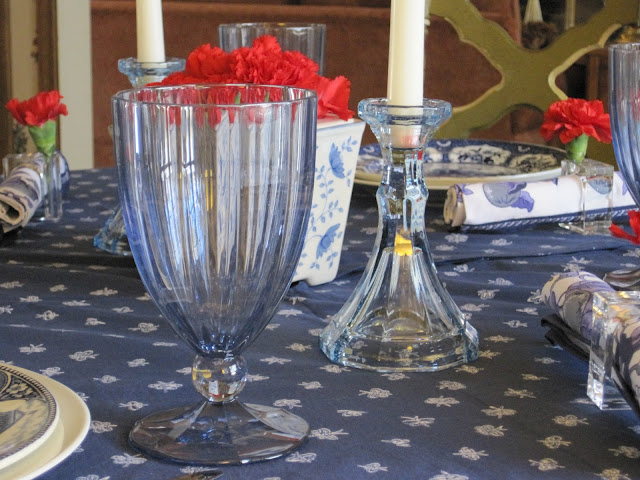 Here's a closer look at the darling clear acrylic napkin rings, holding a napkin from Williams-Sonoma. 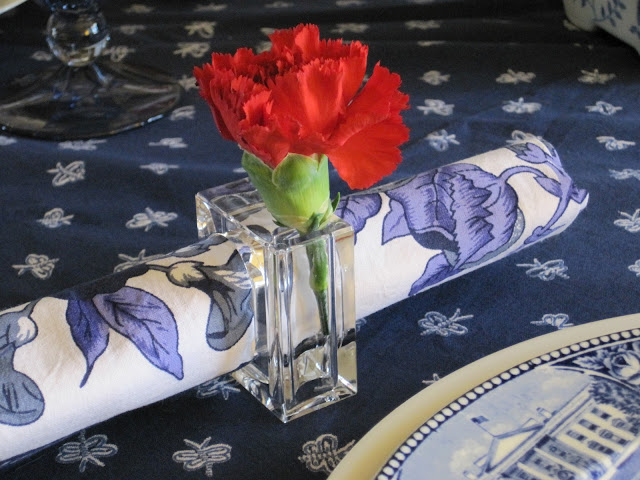 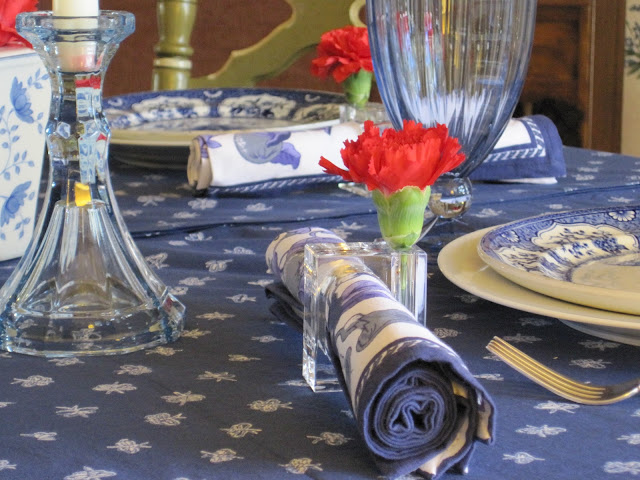 I like this shot of all the different patterns the table includes.  You just can't go wrong with blue and white! 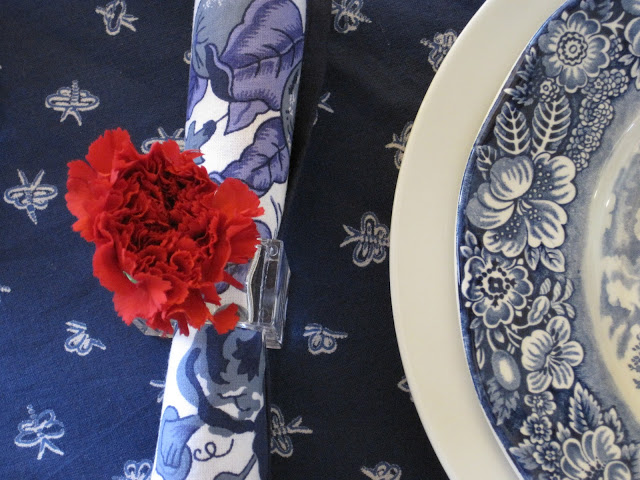 Thank you for visiting my table this week!  I hope you will leave a comment before you leave to visit all the wonderful tablescapes at Susan's Between Naps on the Porch!